The Champagne is beginning to dry, the hangovers are wearing off, and the Mission Street mayhem has subsided from Monday night’s Golden State Warriors NBA Finals championship win, which naturally means it's almost time for a championship parade. The city of Oakland had their Dubs in a row and released the full parade route and schedule in the wee hours this morning, and the parade will be the morning of Thursday, June 15 — yes, the day after tomorrow —with a noonish rally afterward at the south end of Lake Merritt.


KRON 4 has the specifics, and the parade will begin at 10 a.m. Thursday at Broadway and 11th Street in Oakland. (You can begin lining up to get a good view at 5 a.m., and people probably will just like they did two Junes ago). Following the parade, there will be a 12:15 rally at the Henry J. Kaiser Convention Center, on the south end of Lake Merritt. The rally will be closed off once it hits capacity, but there will be a viewing area at Lake Merritt Boulevard and 12th Street. 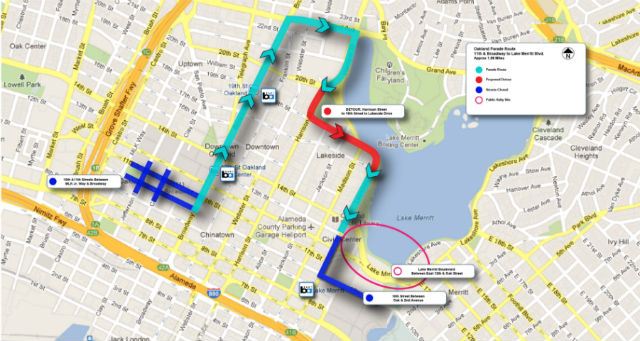 KRON 4 also has a parade route, which can be seen above. ABC 7 points out that it’s the same parade route as in 2015 (CBS 5 did a livestream in 2015, so we’ll see if that happens again.) If you’re taking BART to the parade, which you should, BART has a handy rider’s guide to the day's logistics.

Will Draymond Green be super wasted in the morning hours again? He was in 2015! We'll find out Thursday for the 2017 NBA Championship parade.

The windiness and chilliness of the last couple weeks is going to be slowing down and warming up this week (at least during daylight hours), with San Francisco looking at a downright balmy