Start saying “Happy Pride”, people! The 2016 Trans March, a not-officially-part-of-SF Pride event that has been the unauthorized kickoff of Pride Weekend for a 13th consecutive year, stayed true to its defiant roots and drew a gigantic crowd. A good deal of news was made Friday as the trans community took over the town, including Ed Lee getting booed off the stage and a street being renamed for a trans landmark. But we must begin our pictures and video recap with this troop of school-age Radical Monarchs, easily the most adorable contingent. 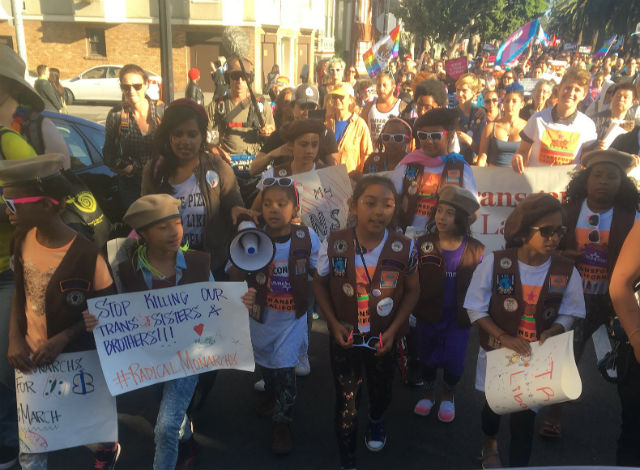 These little girls are straight fire for gay and trans rights.

“This has been one of the most successful Trans Marches ever,” co-organizer Melisa Marquez told SFist, noting a record participation of way more than 5,000. 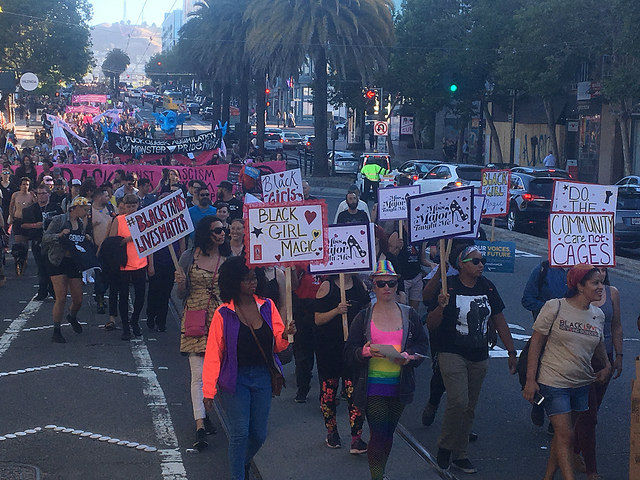 But yeah, Mayor Ed Lee got booed off the stage. Lee was booed off before he was even able to deliver his remarks during the afternoon speaker session, as was Supervisor Scott Wiener. State Senator Mark Leno (before he exits to a chorus of boos) tells the audience in this KRON4 video, “Though his has not been a warm welcome or one of respect, I will continue to fight for transgender rights.”

Wait, they even booed Mark Leno? 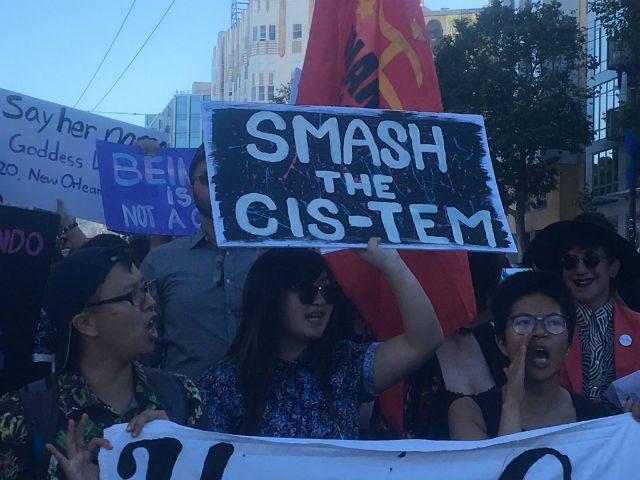 “He’s been a stand-up guy and a good friend of our family,” said marcher Christina DiEdoardo. “But at the same time, when he’s backing the mayor and backing Scott Wiener, that’s a booing offense. And more to the point, he’s a cis person at a trans event. He’s here as a guest.”

"We may have disagreements with Ed Lee, I've got disagreement with Ed Lee, that's not the point. A mayor had never come to this event before [Lee] became mayor," Leno told ABC 7, which reported that Leno "couldn't get through the whole interview without getting heckled."

“I’m tired of people using our community as a prop. A political prop,” Love said. “I’m tired of politicians coming here for five minutes and doing a sound bite and running off. But do they really care about us? Weiner is against homelessness. A lot of trans are suffering from being homeless.” 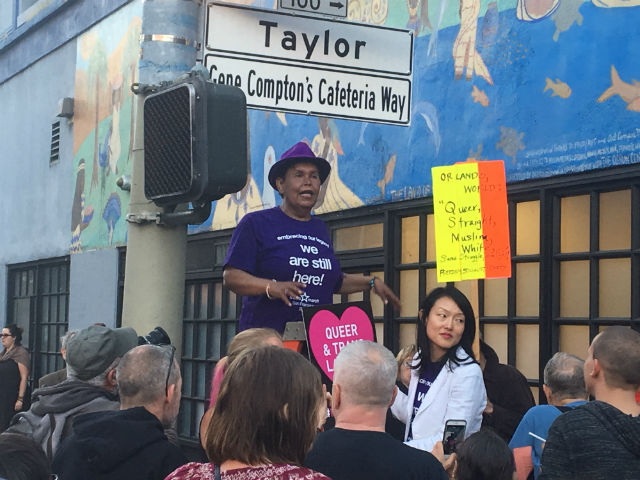 Warmer greetings awaited Supervisor Jane Kim later in the march, presumably because of her work to get the 100 block of Taylor Street renamed Gene Compton’s Cafeteria Way in honor of one of the 50th anniversary of the transgender Compton's Cafeteria riot. 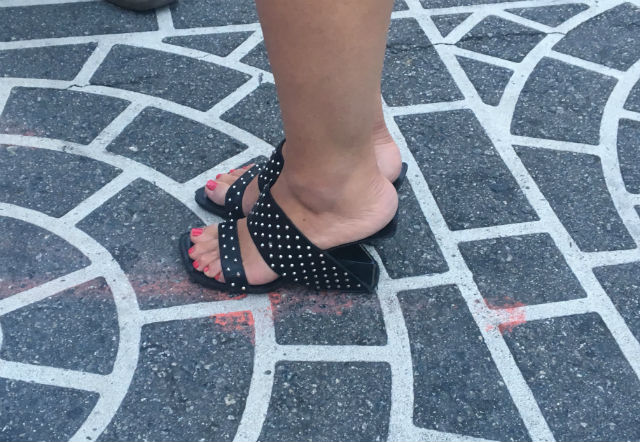 We would be remiss to not document the shoes Supervisor Kim was wearing. Image: Joe Kukura

“We weren’t like gays and lesbians,” said Felicia Flames, a transgender cafeteria patron during the riot. “We could not stay in the closet.” 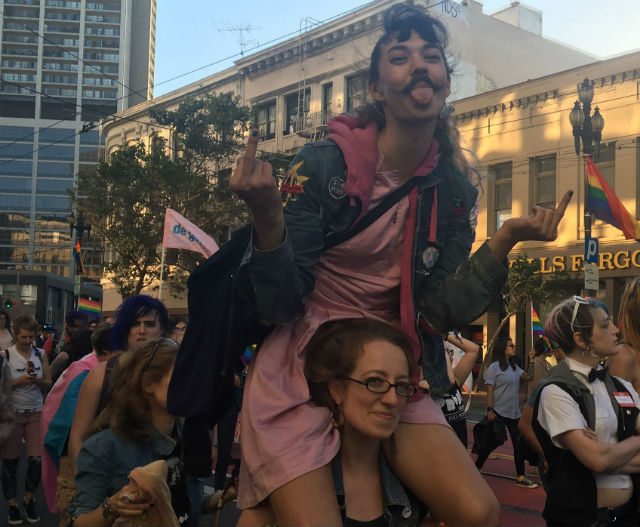 That riot was prompted by police harassment, similar to concerns that caused Black Lives Matter to withdraw from SF Pride. Yet for all the deeply police-aggrieved chants and signage at the Trans March, the crowd was peaceful and mostly very nice to the police. 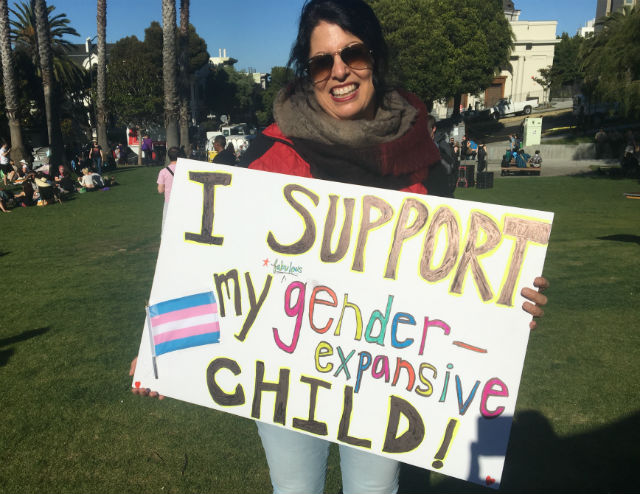 That may have been the influence of of parents of trans kids in the march, like Rebecca Goldfader. “Sid is nine-and-a-half,” she told SFist. “Sid was born female and identifies as gender-expansive and is in the boys' bunk at camp, first time at summer camp and with all of the boys. And really doing some normal kid activities.” 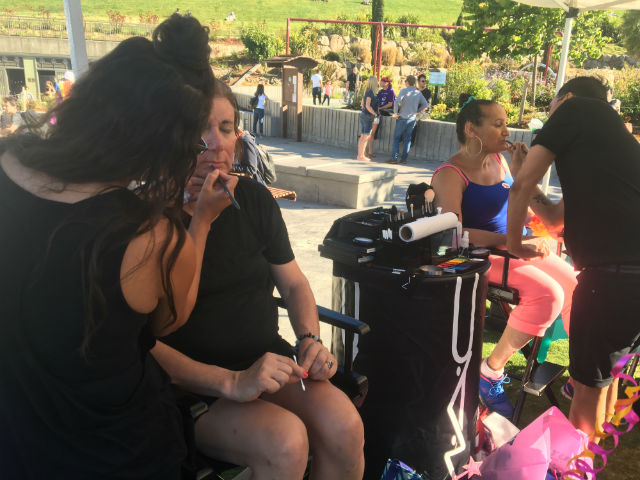 MAC was on hand giving free makeup jobs, so you’ve got to give it up for them.

In conclusion, we have the very beginning of the 2016 Trans March. Pride Weekend is underway and it is on, my LGBTQI MFs!

Related: Gay It Up: Your Official SFist Guide To Pride Week 2016 Is Here

You surely remember that Critical Mass confrontation last August that turned ugly when a Zipcar driver happened upon the bicycle convention, possibly stepped on the gas with a cyclist in front of her,