Offering a good new to-go option coming from or heading to AT&T Park, Marlowe Burger has just opened in what had been Marlowe at Townsend and Fourth. As you probably recall, Marlowe had to close last fall in preparation for a demolition to make way for a 21-story office building, and the team quickly reopened up the street at 4th and Brannan, in what used to be Coco500, handsomely remodeled. But it turns out that the demolition is not so imminent, and the landlord offered partners Anna Weinberg and chef Jennifer Puccio the space on Townsend for however long it's there, which Weinberg says could be anywhere from 19 months to four years at this point. Thus we have their to-go concept, starring Michael Bauer's favorite burger. 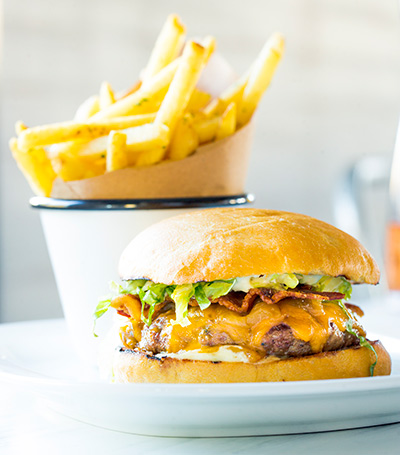 As fans can tell you, it's a damn burger with just a couple secrets to its deliciousness  a bit of lamb mixed into the beef mixture, cheddar, bacon, and horseradish in the aioli. And this new casual grab-and-go outpost marks the fourth restaurant project for the pair who also own Park Tavern, The Cavalier, and the original Marlowe.

Also on the menu, which you can see in full below, is a new fried chicken sandwich, some chicken nuggets, Puccio's famed deviled eggs, and a version of Marlowe's deviled egg salad melt, now called the "Egg roll." And, of course, fries, and they've brought in the beef jerky from sister restaurant Park Tavern.

There's also beer and wine, a kid-sized version of the burger, and a couple cookies from pastry chef Emily Lucchetti  a blondie bar, and a chocolate-chocolate-chip cookie.

And much of the seating from the original restaurant has been removed in favor of standing room and counter seating, so this is very much a place to get in and get out  either for daytime lunch-getters, Caltrain commuters, or Giants fans.

Also important: They will be taking phone orders every day between 10 a.m. and 11:30 a.m., and between 2 p.m. and 9 p.m., and you'll be able to get Marlowe Burgers delivered via Postmates starting on May 1. Note that they're only open for dinner on Saturdays, and closed on Sundays for now. 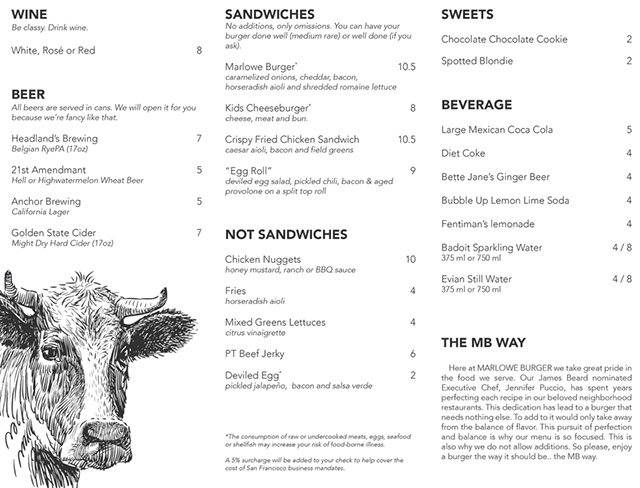 Even at 84 years old, William Shatner is willing to boldly go where no man has gone before. In this case, that might involve going a bit too far. In the above video,

Forget droughts and earthquakes for a moment. According to a new report from the Bay Area Council, a business foundation dating back to 1945, an overdue "mega storm" that could make the rainpocalypse