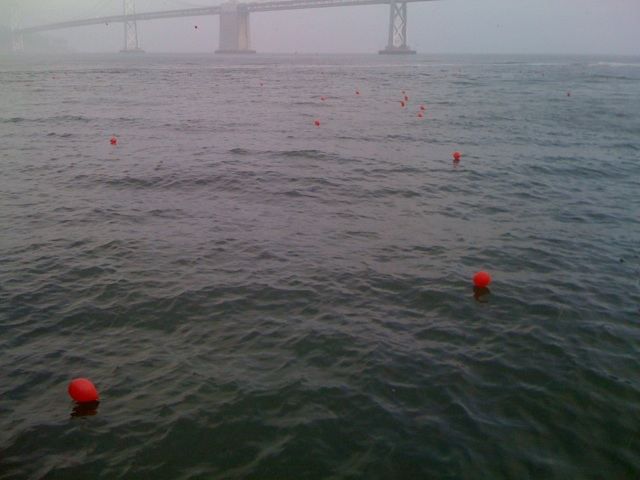 Why were there so many red balloons floating around downtown San Francisco today? Well, someone thought it would be a great (albeit pollutive and thoughtless) way to hawk a new video game. We think @sanbrunamo sums it up best: "please don't pollute our bay and environment with ads attached to balloons. [link] [link]"

Not sure yet if the barrage comes directly from GameStop, but each balloon comes equipped with a GameStop flier.

As you can see, the balloons have now settled in the Bay where they run the risk of threatening wildlife.

Also, according to California Penal Code Section 653.1, today's mass marking ploy might also be illegal. Oops. [Update: According to a commenter, 653.1 applies to mylar balloons. But still.]

SFist contacted both THQ (the game publisher) and GameStop for comment. We have yet to hear back from either company.

Update 4:20: GameStop replies: "We understand the concerns consumers have regarding the impact balloons can have on the environment. However, the balloon drop stunt in San Francisco was created by THQ, the publisher of Homefront, and GameStop had no prior knowledge of it. THQ has since informed us that they released soy-based, biodegradable balloons."

Update 4:35: A representative from THQ contacted SFist. He explained to us that, in addition to the balloons being %100 biodegradable, the game publishing company received the proper permits from the city before going ahead with the balloon ad promotion. What's more, THQ "will employ a cleanup service" to tidying up the city and the bay of any remaining balloons.

Read the company's official response below.

Speaking of Traci Des Jardins, she will be hosting Eye On The Bay's Liam Mayclem tonight for their monthly guest-bartender series. The Brit turned San Franciscan will be making cocktails from 7:30

Not a whole lot of details yet, but BCN says police responded to reports of a shooting at 24th and Harrison in the Mission about an hour ago at 12:15 p.m.