Characters such as Manny, the school slut, Paige, the pig-faced "mean girl," and Marco, the Latino gay resonate with tweens and adults alike. One of the most unforgettable Degrassi characters is Rick, who is Season 3 beats his chubby, plus-size-model (she has a very cute face) girlfriend Terri, putting her in a coma, and subsequently in Season 4 brings a gun to school, shoots and paralyzes the star basketball player (who is black), and in the end is killed by his own gun.

Does anyone else find it at all creepy that the Rick (picture 1) looks an awful lot like the kid who yesterday went on a shooting spree in an Omaha mall (picture 2)? 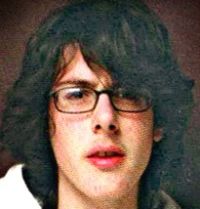 It sure gives us the heeby jeebies.

Watch Degrassi on The N or Your TV20.

With its umbilical sliced, face slapped, and shivering body wrapped in a toasty blanket, the new Muni double-decker bus has finally arrived. San Francisco Sentinel has the story (as well as a few