Though last week's Golden Gloves was not actually the "Golden Gloves" event sanctioned by boxing's governing body, USA Boxing, that information failed to dissuade some of the Bay Area's greatest fighters from appearing at the Civic Center this weekend.

After battling Symphony, Asian Art Museum, and fight fans for parking, we entered Bill Graham Coliseum as the Chronicle's Editor, Phil Bronstein departed (insert joke about the shifting tides of modern media here). Too bad for Bronstein, he missed a couple of really great fights. 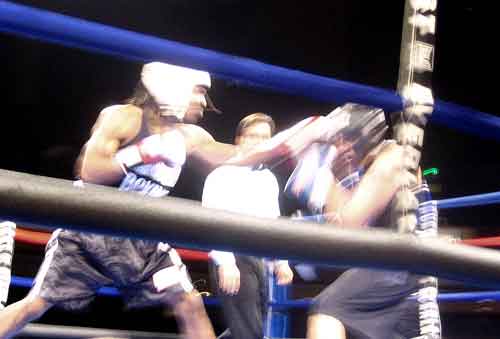 One of those great fights was the 165 lb open male division match between Straight Forward Club's Richard Hargraves and the unattached Clint Coronel. We have to admit that we got more than a little worried about Hargraves, especially after Coronel got him against the ropes in the first round. But Hargraves rallied and was eventually triumphant.

All photos by SFist Tim Ehhalt

Subject: Just overheard on the 6th bus heading downtown At 4th and Market, this average young white guy gets on all excited and calls his friend on his cell. He says, "oh my

We'll start with SFist Peninsula headquarters in Menlo Park at Kepler's: The kickoff to their travel series comes from Frances Mayes (warning, there's sound at that link), on Saturday, April 1, 7:30