The onslaught of gentrification has been blitzkrieging the Valencia Street Corridor for the better part of 30 years now, yet one little patch has always maintained the neigborhood’s old-school, punk-rock, outlaw roots. Thanks to the Clarion Alley Mural Project, the 400-foot lane between Mission Street and Valencia Street near 17th Street has been a colorful, showcase gallery of the “Bomb Condos! Not Murals” street art ethic since 1992. As the project celebrates its 25th anniversary this Saturday with the Clarion Alley Mural Project 25th Anniversary & Block Party, SFist sought out the creators and organizers behind the mural project to find out how they got more than 500 artists to paint 700 different murals over the decades, and for that matter, whether the new murals are painted specifically for the annual October block party or whether they go up fresh all year long.

“New murals go up on the alley all year long,” current Clarion Alley Mural Project co-director Christopher Statton told SFist. “The way we curate is very specific to each space and the history of the space.”

The history of that space  as a mural gallery, at least  goes back to a time when the Mission District was still just beginning to see its Latino population displaced. The year was 1992, an anti-immigration dick named Pete Wilson was governor of California, the term “full-blown AIDS” was still a morbid part of our everyday vernacular, and Valencia Street’s featured storefronts were of raggedy collectives like Leather Tongue Video and Artists Television Access. The Women’s Building was not yet covered in murals, but Clarion Alley would be.

The First Clarion Alley Murals: 1992
If you were in San Francisco during the 1990s, you’ll get nostalgic goosebumps from Fiona O'Connor Devereux’s documentary above that shows Clarion Alley before and during the painting of the very first murals. The film is narrated by Rigo 23, one of the initial muralists whose street sign murals still grace our city today.

“It was the first years where Burning Man was happening, ACT UP had been going on for a long time,” Rigo 23 says. “San Francisco was always seeking a dramatic reinvention of being in urban space and in society. With the AIDS crisis, a lot of people were highly motivated to do that, knowing they only had a few years to live.”

Rigo 23 shared the 47 Clarion studio space (which had once been the main theater for groundbreaking performance troupe The Cockettes) with painter Aaron Noble, a self-described “co-editor of a critical art zine called Bloatstick, which had an editorial goal of 90% negative reviews.” Clarion was a decrepit specimen of despair and junk, a prostitution and drug sale stomping ground littered with trash, needles, and human waste.

“Clarion Alley happened to be very close to a place where one could buy heroin that was I think heavily cut with baby laxative,” Rigo says. “So we had a lot of health-related issues right in front of our house when we walked out every day.”

The alley had blighted Mission Street on one end, and the Valencia Street police station on the other. Neither felt welcoming, so the two painters tried to create a Balmy Alley-style collection of murals. While Balmy’s art was more focused on U.S. military intervention in Central America, Clarion would present art about what was happening right here in the Mission District. An initial gang of six painters found themselves joined by the street’s landlords, handymen, and auto mechanics, all hoping to give Clarion a new character that wasn’t cops or crack.

“We were literally between this sort of this illegal drug market, labor market, housing market, and this institution that was supposed to regulate those kinds of things in the urban space,” Rigo says. “We always felt like this alley was supposed to be between the problem and the solution. So we just started painting the hell out of it.” 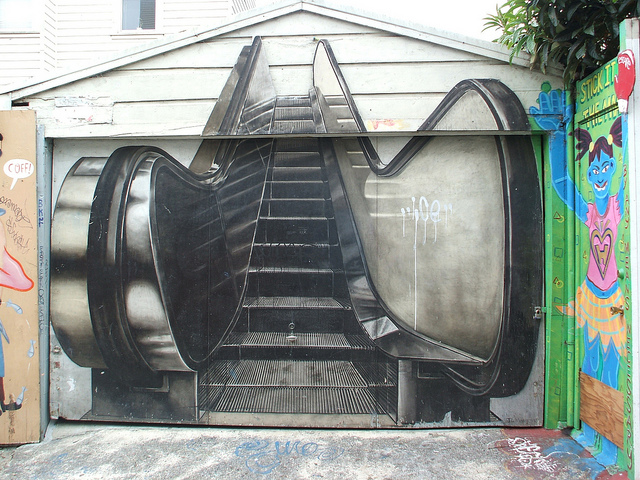 More Murals Appear: 1993-1997
Only a few murals went up in the alley that first year, but more would come. Painter Julie Murray, whose early 90s escalator mural is seen above, writes in her own remembrance that “They then went about seeking permission to paint the various walls and garage doors from whomever they could. In most cases they were successful and where the owner wasn’t to be found they painted anyway.”

The transformation had only started, and Clarion Alley was still a dump. Murray also lived on Clarion. “On various bicycles of dubious provenance I’d belt up the alley holding my breath till reaching the door of the loft, exhaling only when safely indoors,” she wrote. “Such was the prevailing breeze that whatever was fermenting further up wafted down toward the entrance collecting there in toxic eddies that could toss even the most stout hearted out of the saddle. It was a leaden sweet and sour tang of human waste and MD20.”

But the project caught the attention of some of San Francisco’s premier muralists. Precita Eyes co-founder Susan Cervantes painted a work there for free, as did local legend “Chuy” Campusano (who painted his last mural on Clarion before his death in 1997). The resurgent alley would then find itself used as a regular location for late 90s cop drama Nash Bridges. 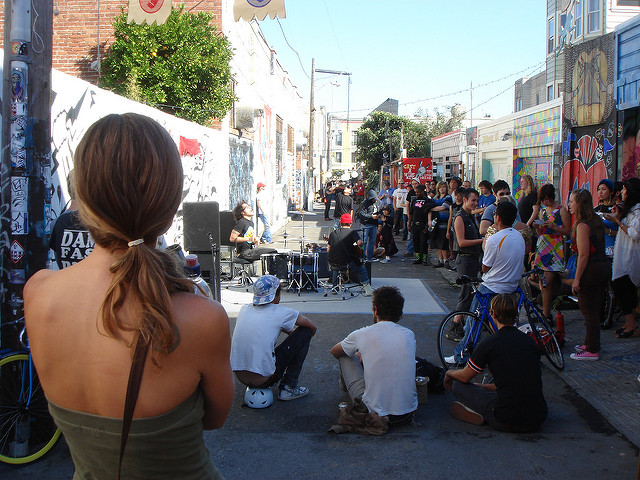 Co-founder Aaron Noble recalls the first Clarion Alley Block Party as “free, unsponsored, anarchic, and for the most part peaceful and unpoliced. It demonstrated the reality of the life the mural project proposes, and has become an organizational focus, with many artists working to a late October deadline.“ 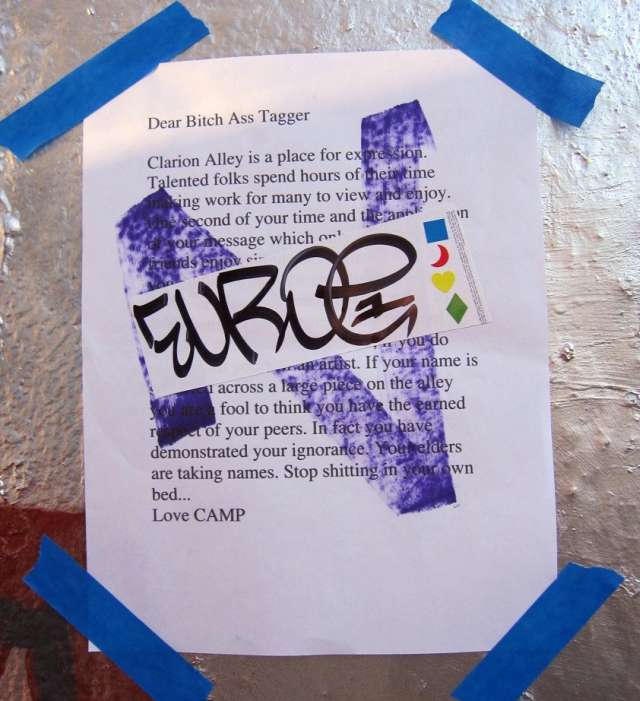 The Tagging of the Murals: Pretty Much Every Year Since the Beginning
SFist readers know that deplorable teens tagging Clarion Alley murals is a long-running and unfortunate tradition. But it really is a “tradition”  and goes back to the early 90s, when a teenage street gang called the Vatos Mexicanos Locos argued that the murals were actually desecrating their fabulous tagging work on the alley.

“Their sensibility was shaped by video games, gang culture, and hip-hop,” Noble wrote. “They had a keen sense of style and never failed to tell me if I looked or sounded gay, which was often. They gave me fashion tips that I should, perhaps, have followed. They were ruthless in critique. A mural was either machin [respectable] or it was not, and if it was not, then what possible reason could there be not to bomb [tag] it? Also, red sections of any mural had to be bombed, as a matter of honor; and any mural on their own garage doors, regardless of quality or content, had to be bombed.”

The teens were eventually placated with their own mural space, which they used to produce a crude painting of Beavis and Butthead. But the tagging issue, obviously, persists to this day.

“We always end up facing tagging and people coming in and painting over work,” Statton told SFist. “There’s a core group of us who help to maintain the murals. Walking into the alley and seeing tags is always a tragic thing, but it’s a public space. And it’s amazing that we get to work in such a noted environment that draws so much attention. It just kind of comes with the territory.”

Notably, a 2012 mural of trans activists was quickly tagged in what appeared to be an explicitly transphobic gesture. Statton sees it all as the conversation the alley creates, and the evolution it fosters. “Not everybody likes every piece,” Statton said. “It’s meant to be a project where everybody can find something they like in it, and find something that they don’t like in it.”

Rigo 23 seconds the notion. “We wanted there to be something you wouldn’t like, because that’s just how diverse the neighborhood was,” he says in the documentary.

Evictions Blow Up the Alley: The 2000s
The above time-lapse video shows the painting of Megan Wilson’s “Home/Casa” in 2000, a mural literally painted on the street’s surface with the word “Home” on the Valencia Street end and “Casa” on the Mission Street end. Wilson took over as co-director of the Clarion Alley Mural Project in 2001, and not under the most pleasant circumstances.

Previous director Aaron Noble was forced to move to Los Angeles, as the original 47 Clarion space that served as his home and studio was demolished in 2002. Evictions and demolitions were rampant in the neighborhood, as sure-fire, can’t-miss dot-com internet businesses like Pets.com, Napster, and [email protected] moved in a new generation of Valencia residents and marked the a new phase of the neighborhood’s slow but sure fancification.

Success and Resistance: 2010 - Today
Clarion Alley has since been popularized as a backdrop on shows like Sense8 and the terrible thing above called Girlboss. But the mural project’s leadership has been careful to control what work appears onscreen and to ensure that the artists are compensated. And they’ve maintained the alley’s original political spirit of resistance.

Notably, these days you will see Jose Guerrea Awe’s anti-police violence mural “Rise in Power”  placed very noticeably across from a police station. The Anti-Eviction Mapping Project’s “Narrative of Displacement” also sits in a prime corner spot that had previously been used for murals announcing the schedule of the bands playing at the Block Party.

The project still goes to great lengths to include disenfranchised communities’ artists, like a new mural by the Arab Resource & Organizing Center and Art Forces. “We had been working with them for the past two years in hopes of having them find the time to paint something,” Statton said. “It was really important to give them the space in the alley to have a voice.”

The Clarion Alley Mural Project has remained an island of resistance in a sea of gentrification for an entire 25 years. It’s presence may have something to do with with any trace of counterculture remaining on Valencia Street, and any continuing feeling of community in the area.

One of the Antifa Terrorist left a big clear hand print on the window of my suv. Berekley CSU is pulling the print now. pic.twitter.com/XETAWM9NRt— Based Stickman (@BasedStickMan_) October 18,