Of the 10 homicides that have occurred in the Tenderloin this year, arrests have been made in seven of those cases. But one unsolved murder has gained a higher profile  the fatal September 8 shooting of nightclub personality Anthony “Bubbles” Torres  and now nearly a month afterward, Bubbles’ friends and neighbors are growing restless over an apparent lack of progress with the investigation. The SFPD held a community meeting Monday night to address residents of the Tenderloin neighborhood where the shooting took place, a crime-blighted area where a deli had been openly selling heroin over the counter, where the late-night strip club New Century Theater is long alleged to be responsible for shady after-hours activities, and where residents feel left in the dark on police communications as they see the Larkin Street and O’Farrell Street corner turning into some lawless equivalent of Hamsterdam from The Wire. 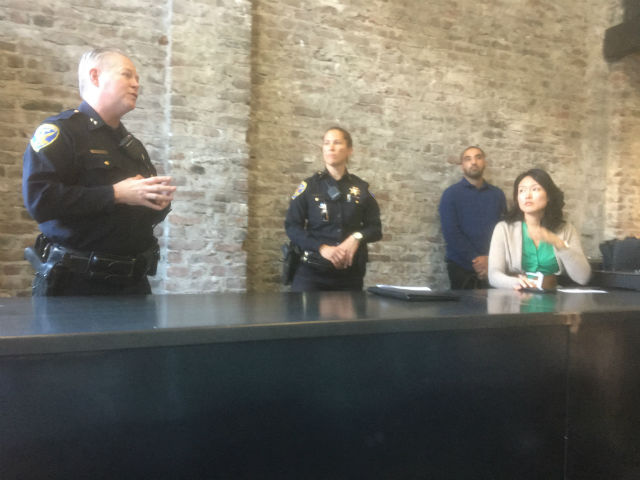 First, an update on the Bubbles’ homicide investigation  there is no update. “There’s not a lot of questions we can answer. This is a very active case,” said SFPD deputy chief Mike Redmond, a onetime Tenderloin beat officer. “In every homicide, we are very, very careful in what we release, especially when there hasn’t been an arrest made in the case. Things could get out that could jeopardize [the] investigation.”

This is totally understandable, but has also left the rumor mill churning as concerned residents fling accusations, largely in the direction of one party. 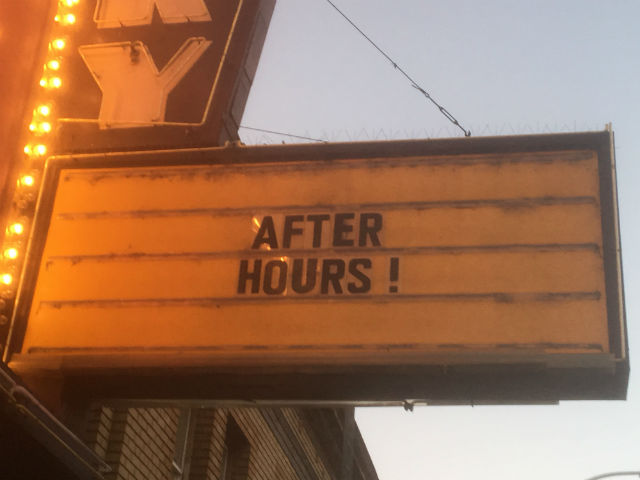 Here we see the marquee for the New Century Theater, on which the strip club is still promoting “After Hours!” despite the recent homicide just outside on Larkin Street, after hours. “We have a bad actor in terms of our neighbor, the New Century [Theater]. They’re suspiciously involved with this case,” said neighborhood activist David Elliott Lewis. “They’ve been a bad actor for a lot of years and allowed a lot of illegal activity to happen in front of their business.”

Neighbors feel that club has an odd hold over the Tenderloin’s homeless population, with many people afraid to speak out about crimes they see on the New Century front sidewalk. “From my understanding and the feedback we’ve gotten, a lot of folks did witness [the murder],” said Bubbles’ attorney Jim Reilly, who asked that a reward be offered for any information. ”I hope that the tipline information is well-distributed in the community.” That homicide tipline, by the way, is (415) 575-4444.

“A lot of the community feels like this was clearly a case of a hate crime,” Reilly said to applause, asking if the SFPD Hate Crimes Unit was involved. Police responded that “all the resources” of their units were going to this case.

Residents asked that more cameras and lights be installed on that Tenderloin block  home to a children’s playground  where even the most pedestrian pedestrians are cornered and harassed with unusually aggressive drug sale pitches. Locals also wondered why no composite sketches of suspects have been released on this case.

Tenderloin Police Captain Teresa Ewins noted that measures are being taken, though may not be immediately visible. “We are going to be looking into the New Century with the city attorney,” Ewins said, also noting that she’s adding more beat cops to that corner. “I asked them to do this assignment for a very good reason. It’s because of who they are and how they work,” she said of those officers.

But neighbors argued the police could be doing more with what they already have. “They haven’t checked this whole block for tapes and there are over 15 cameras,” said one resident of the specific block, though also noting her building’s tape had been checked.

That sentiment was backed up by no less than the host of this community meeting with police, RS94109 record shop owner Sohrab Harooni. “Not one time have any police come in here and asked us, ‘Hey, can we see your camera? Hey, what’s going on with this?’. Or asked us any questions,” Harooni said.

“We see so much stuff happening out our windows, we never, ever get anyone to come talk to us,” said Strand Barber and Beauty owner Adriel Lively, also a neighborhood resident and mother of four-year-old. “We see more than you guys.”

To be fair, there are challenging externalities that really hamper these police investigations. In addition to witnesses being spooked or intimidated, neighbors feel that most drug dealers in the area come from out of town. That means that if a search warrant can be produced, SFPD often has to hand that warrant off to other cities and just hope for the best. Additionally, courts tend to treat drug offenses as non-violent crimes, even though violence so frequently accompanies them, so offenders easily return to the street..

“We can’t give up just because we have challenges in our justice system,” deputy chief Redmond said. “We know as a police department, the way we can get close to the community is to do a fair and good investigation, and that an arrest is made to get some closure. That is our goal.”

Neighborhood residents add that there are other contributing factors. “I’d like to see the city remove the toilet!” a bartender from the nearby Gangway shouted at the meeting. He was referring to the public toilet at Larkin Street and Myrtle, which some feel attracts additional sketchy elements, and outside of which Bubbles was found shot. These toilets, while seen as a vital resource for the homeless, have frequently been the target of criticism for being havens of drug use, muggings, and small-time prostitution.

Thanks @peoplemag for the feature! http://greatideas.people.com/2013/09/26/the-new-top-chef-masters-winner-sounds-off-on-skydiving-and-more/ A post shared by Douglas Keane (@douglaskeane) on Oct 1, 2013 at 10:23am PDT Five years after Michelin two-star