JAZZ & POETRY OPEN MIC: The WordParty at PianoFight is a perfect occasion for all poets, frustrated and non, to get a chance to do a reading on stage with a jazz band backing you, really beatnik style. There's a three-minute time limit, and sign-ups for poets starts at 6:45, and it's free admission for all, with food and drink available. Also, tonight's a little special because new SF Poet Laureate Kim Shuck will be in the house. PianoFight, 144 Taylor Street, 7 p.m. to 9:30 p.m., free

CHEAP (FRINGE) COMEDY: Canadian comedian Logan T. Smith comes to the SF Fringe Festival and will be doing his final set of four tonight, titled Stories Hardly Worth Telling. He turned to comedy after two years as a Mormon missionary, and "growing up in a big family, seeking work after school, and working in Pest Control" are his main topics. Exit Theater Stage Left, 156 Eddy Street, 7 p.m., $8

CIRCUS-Y DINNER THEATER: Story Time with the Golden Gate Dolls, which had its first installment in July, is a "gourmet experience of decadent proportions with plenty of circus tricks, aerial artistry and theatrical shenanigans to dazzle and delight." It's dinner, but with a circus, and it's kind of burlesque-esque with a nightclub feel. If you don't want dinner, there's a $27 standing-room option. Great Northern, 6:30 p.m. and 9:30 p.m., tickets here.

INTIMATE GOGO PENGUIN SHOW: Manchester-based contemporary jazz trio GoGo Penguin combines influences of trip-hop, electronic, and classical music for a sound that's not easily categorizable, and they're coming to the intimate Joe Henderson Lab at SFJazz for four sets this week that are almost sold out, starting with 7 and 8:30 p.m. on Wednesday. Pitchfork calls their music "a piano-driven blend with all the traditional aspects you’d expect from the genre while still scanning as something refreshingly vibrant and contemporary." SFJazz, 201 Franklin Street, 7 and 8:30 p.m., $30

ACADEMY OF SCIENCES NIGHTLIFE WITH SUNSET YOGA: As part of their ongoing "Brain and Body" NightLife series, this week's adults-only evening affair at the Academy of Sciences features sunset yoga on the roof (bring your own mat), as well as underwater yoga in the aquarium, dancing, and a talk by Yonatan W. of Stanford about consciousness in neuroscience. Academy of Sciences, Golden Gate Park, 6 to 10 p.m., $15

FLAMENCO GUITAR CONCERT: Spanish guitarist Vincente Amigo, who was named Best Flamenco Guitarist by Guitar Player magazine, will be putting on two shows this week at the Herbst, Thursday and Friday, sponsored by SFJazz. He was "Christened by the late maestro Paco de Lucía as the next great flamenco star," as they tell us, and Amigo "has more than lived up to his promise." Herbst Theater, 401 Van Ness Avenue, 8 p.m., $45-$95

INTENSE, HILARIOUS HISTORY LESSON, WITH DRAG: Taylor Mac's almost indescribable 24-Decade History of Popular Music continues with Chapter III on Friday, a six-hour segment that will cover 1896 to 1956, and will include a deep dive into the 1930s hit "Happy Days Are Here Again." You have to experience it to understand, and don't worry if you're way back in the balcony  Taylor has a habit of pulling people down from the cheap seats to sit in the pit or right on stage. The Curran, 5 p.m., $49 and up

JOHN HUGHES CLASSIC IN DOLORES PARK: On a weekend that is shaping up to be perfect for an outdoor movie, we have the final screening in the Film Night In the Park series, which is sponsored by the Monterey Bay Aquarium. This week, it's 1985's The Breakfast Club, so expect a Gen X-heavy crowd. Dolores Park, after sunset (which is at 7:05 p.m.), free

PRE-FOLSOM KINK PARTY: Now that Kink.com has all but left us, there's still the SF Citadel to host their 12th annual Folsom eve bash. This is more for the straight and bi folks into kink, and there will be suspension bondage on display, and plenty more not for the faint of heart. And good news if you're in a throuple: Admission at the door is $40 per person, but $30 for each additional person with you. And advance tickets are here. SF Citadel, 181 Eddy Street, 7 p.m. to 2 a.m., $30

BIG GAY DANCE PARTY: There are a bunch of events happening all over the city as tourists flock to town for the High Gay Holidays that is Folsom Weekend, but possibly the largest gathering of the shirtless tribe will be Magnitude, the official pre-party for the fair, where many a tourist and local will dance the night away and never make it to the fair. Alex Acosta and Ralphi Rosario will be DJing. And it ain't cheap! The Armory, 9 p.m., $100-$160 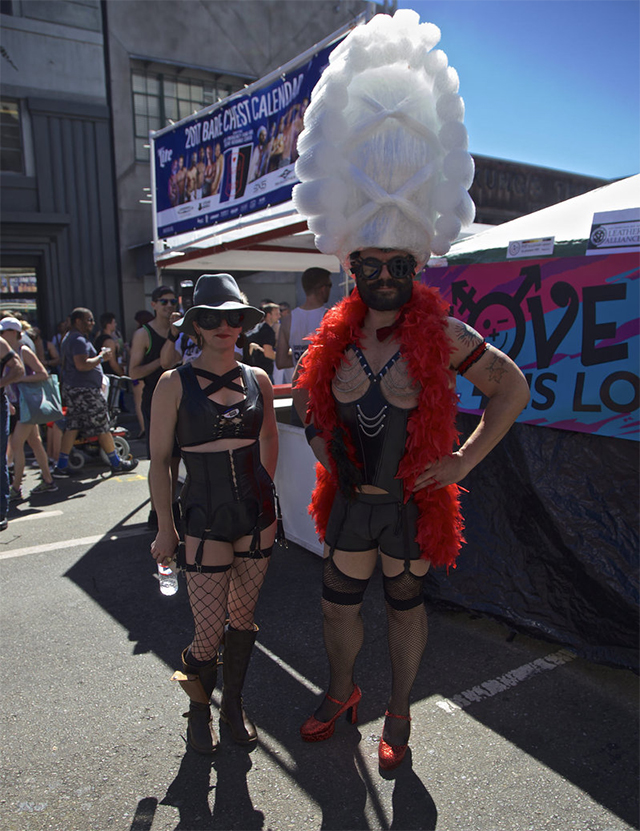 Continuing a deeply infuriating trend, the San Francisco Sheriff's Department reports that another law enforcement officer's gun was stolen out of a rental car. ABC 7 says that according to Sheriff Vicki Hennessy,