Of all the bizarre and inexplicable chapters to the rise from Donald Trump's presidency and the reestablishment of racism as a fashionable contemporary ethos, few are more bizarre and inexplicable than the emergence of a crudely drawn anthropomorphic amphibian known as Pepe the Frog as an unauthorized symbol for the neo-Nazi and white supremacist movement. Pepe’s creator, Los Angeles artist Matt Furie, is finally fighting back  and has retained one of the top intellectual property law firms in the country to play whack-a-mole with a laundry list of cease-and-desist letters and Digital Millennium Copyright Act (DMCA) takedown demands. CNet reports these demands have been successful with content hosted on Amazon, Apple, and Google Play. But alt-right firebrands like punched Nazi Richard Spencer, Mike Cernovich, and a fellow who calls himself “Baked Alaska” are testing a new set of boundaries in hopes that no law of the land should apply to loudmouth white guys, putting the comic book frog character in the crosshairs of an impending legal showdown.

Matt Furie was too dumb to realize his trademark for Pepe The Frog has been expired since Oct 2016. False DCMA claims are strong violations. pic.twitter.com/B3S4Dk3rVX

Furie has retained Wilmer Cutler Pickering Hale and Dorr LLP to prosecute a litany of removals of Pepe’s copyrighted likeness from right-wing hate sites. "[Furie] was very serious when he said that we wanted to make clear that Pepe was not the property of the alt-right and couldn't be used by the alt-right," Furie’s attorney Louis Tompros told Motherboard. "But actions speak louder than words and we wanted to make sure we were backing up that statement against entities that were misappropriating the Pepe character and image. That's what we've been doing over the past few weeks." 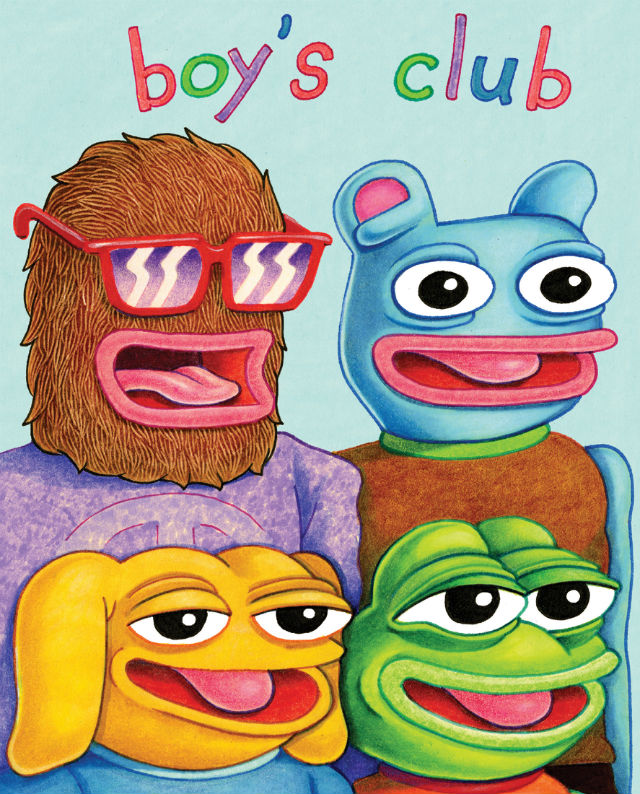 Pepe the Frog’s innocuous origins date back to a 2006 comic book called Boys Town, a harmlessly juvenile exercise that gained something of a following on Tumblr and spawned a litany of innocuous parodies on 4Chan. But nothing stays innocuous for long on 4Chan, and Pepe’s image was oddly incorporated into the rise of Trump, while trademark phrase “Feels good, man” was repurposed as “Kill Jews, man.”

“Recently [Pepe] has fallen victim to some very negative branding here in the United States,” Furie puts it mildly in his Kickstarter video for an attempt to relaunch Pepe. “This project is an effort to re-rebrand Pepe the Frog as a symbol of love, peace, and acceptance.”

Furie’s efforts have been successful with the bigger online media brands. The Apple Store banned anything with Pepe the Frog in June of this year calling it “objectionable content.” Amazon removed several products that used Pepe’s likeness without authorization, and Google Play removed a game called Build the Wall: The Game for similar unauthorized use.

All who served in the 2015-2016 meme war you have been called back to duty to fight against the tyrants attacking @Cernovich & @bakedalaska pic.twitter.com/Bmeqi3YBxA

But the wingnuts are determined to hold out on their use of the likeness, and nothing excites Trump Twitter more than the ability to pretend they’re enlisting to fight in an actual war. Mike Cernovich took to Medium to declare his martyrdom, and republished the response from his own attorney. “Should you choose to file suit against Mr. Cernovich, we will be delighted to embarrass the fuck out of you.” writes his attorney Marc Randazza.

Attorney Marc Randazza is currently in Chapter 11 bankruptcy, while Matt Lurie’s attorney lectures at Harvard. It seems easy to pick a winner in this one. But in this up-is-down world that is Donald Trump’s America, I’ve seen uglier frogs get turned into princes.

Related: Latest On Free Speech Week: Coulter And Bannon Not On Schedule; And Who Is 'The Berkeley Patriot'?

Once again: Traffic in the Bay Area is getting much, much worse. NBC reports that according to the Metropolitan Traffic Commission, time spent in weekday traffic has skyrocketed by 80% between 2010 and