A new bakery has set up shop on 20th Street and we'd like one of everything.

Baker Judy Kahn ventured out on her own with the adorably-named Kahnfections after leaving Bernal's Sandbox Bakery in 2011. She's been wooing tech companies and other Bay Area businesses for the past few years with custom deliveries of sweet baked goods. Now Kahn's scones, tarts, and muffins (and Verve coffee) are available to the rest of us at her brick and mortar Kahnfections on 20th Street between Shotwell and Folsom.

Kahnfections kicked off its soft opening on Friday just after 6 a.m., with a crowd of Peninsula-bound bike-to-workers who clearly understand the nutritional value of quality carbohydrates. According to Judy's husband, Mark, who corresponded with SFist Saturday, "A lot of the folks who were by yesterday were super-familiar with her baked goods. But, we also have had a great early response from the neighborhood, which has been way cool." 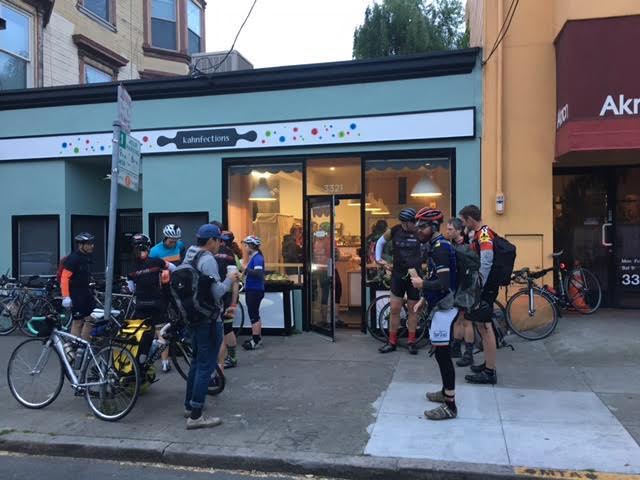 They're continuing with a soft opening this week, Kahn says, and will have their grand opening on Saturday May 13.

A bunch of San Franciscans getting ready to plow some croissants and bike to Silicon Valley. (Photo: Mark Kahn)

An errant driver is facing allegations of assault with a deadly weapon, police say, after she tried to flee a San Francisco traffic stop. Police say that the woman, whose age was described

As we learned the other week, former state senator, assemblyman, and SF supervisor Mark Leno has announced he's running for mayor in 2019, i.e. almost two and a half years from now.