Anne Pruett had surgery the day before Donald Trump was inaugurated. Bedridden and dismayed by the images she saw on TV, she decided to get political.

"That's the only reason I made this [SF Tax March] Facebook page," Pruett tells SFist, "I had a lot of free time on disability, and I had a laptop. I've never done anything like this in my life."

Marches across the country on Saturday demanding that the President release his tax returns, many led by first-time organizers, were partly inspired by a viral tweet from law professor Jennifer Taub. An executive committee formed to start planning an action around the demand for April 15. In San Francisco, Pruett expects anywhere between 5,000 and 36,000 marchers to descend on Civic Center this Saturday — a pretty serious range. But one number that's more certain: There will be four giant inflatable chickens of various imposing sizes.

On March 3, I was sitting in a San Francisco high school auditorium with 500 other political neophytes being trained by veteran organizers on how to talk to those who don’t agree with us politically. A bit restless, I began Googling around for a symbol grotesque enough for our cause, something bloated that would block out the sky like a Macy’s Thanksgiving Day balloon. I punched in “TRUMP BALLOON” into the search bar and discovered the Trump chicken: a huge inflatable rooster that bore an uncanny resemblance to Donald Trump.

What she found had been created by the Seattle-based graphic artist Casey Latiolas, inflatable rooster balloons crafted for this Chinese Lunar New Year, the Year of the Rooster. They were manufactured at a factory in Zhejiang, China. Latiolas told Reuters the cartoonish resemblance to Trump is a coincidence, but he doesn't deny it exists.

Morton was inspired. "I wanted to fill a 60-foot Chicken Don with helium so my fellow protesters and I could march it down San Francisco’s Market Street on April 15, preceded by brass bands and followed by people in costume," she wrote.

The Dawn of Chicken from Peter Menchini on Vimeo.

Morton contacted Latiolis and eventually tracked down a rooster for sale on the Chinese e-commerce site Alibaba for a reasonable $400. The SF Tax March team, who had begun to embrace the chicken mascot, started a gofundme page. It was overfunded in 52 minutes, Pruett tells SFist. "We asked for $1,000 and people kept donating. We bought two more chickens, and we got another donated."

After the fundraising success, Morton emailed SFist. "We raised our whole $1000 goal in less than an hour last night but we need more for the march. This is uniquely San Francisco. Let's get a flock." Now they've got just that.

There are 17 other cities who decided to get chickens, too. "Chicago followed suit, and we convinced New York and eventually DC," Pruett says. "Houston got one too, also overfunding their Gofundme in a day." (That DC chicken, by the by, was causing quite a stir in DC's Dupont Circle, our sister site DCist writes.) 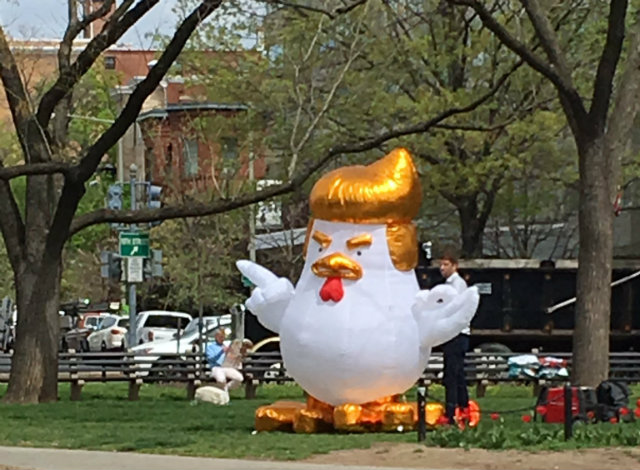 To state the obvious: No matter how many inflatable chickens, or marchers, turn out on Saturday, Donald Trump isn't likely to release his tax returns voluntarily. But for Pruett, that's not the point. "Donald trump has ruined our lives, and now he still dominates everything. But my life right now is all about the chickens. It brings us so much joy. We're so emotionally drained, and devastated, but it brings people a lot of joy and energy."

San Francisco's Tax March begins at 1 p.m. in Civic Center. A rally starts at 2 p.m. and a march begins at 3 p.m. down Market Street toward the Embarcadero. Pruett will still be there on crutches, though she admits she's exhausted by all the planning effort: 50-60 hours a week spent on the march.

"My goal is to organize the base and to hand them off to groups that have local infrastructure who can exert legislative change," says Pruett. One of those groups is Common Cause, who will be at the march: "I really want to push them hard — they're an anti-corruption organization and this is an anti-corruption march."

Who can say when Donald Trump's own chickens will come home to roos, but his inflatable effigies could soon be put to new use. "We've been approached by a couple other groups who want the chickens at their stuff," Pruett says. "We have a lot of them, they're not that expensive. We're doing international business with China now — i'm in touch with a manufacturer who has been outfitting a plant, just for us, to pump out chickens for us."

That's a fact, Pruett suggests, that could at least ruffle the President's feathers.

The Trump chicken was hanging out in Dupont Circle this afternoon. (Photo by Erik Stegman)

#BridalveilFalls was incredible. 💦 There was so much water coming down that you were getting rained on before you even emerged from the trees to see it! 🌲@yosemitenps #yosemite #yosemitenationalpark #yosemitenp #california #unitedstates #america

Rideshare service Lyft has managed to avoid many of the high-profile public relations disasters of its larger competitor Uber, generally eluding terrible headlines while Uber has experienced a nonstop parade of recent scandals