A new theoretical look at housing markets around the country suggests what the prices of housing would be if there were less (or no) land regulations  things like planning departments and design reviews, etc. No drumroll necessary, San Francisco gets singled out as having the greatest discrepancy when it comes to what housing should cost versus what it does cost, but the New York Times points out that all of coastal California has this in common, with the same issue seen (per the graph below) in Los Angeles, Ventura, and San Diego.

The research comes from a pair of Wharton Business School economists, Ed Glaeser and Joe Gyourko, who discuss in a new paper how there was a sea change over the last several decades in how America's most desirable cities  including New York  regulate building, and consequently how they respond to economic growth. "For most of U.S. history, local economic booms were met with local building booms, so labor could follow shocks to local productivity," they write. "However, between the 1960s and the 1990s, it became far more difficult to build in the nation’s most desirable locations, especially those along the coasts. Higher economic productivity in San Francisco now leads to higher prices, not more homes and more workers."

So, in addition to there being greater demand to live in these highly desirable places, like California's coastal cities, you have city governments responding to demand over the last 50 years with a greater need for control  not a new idea, but the chart below is nonetheless interesting. 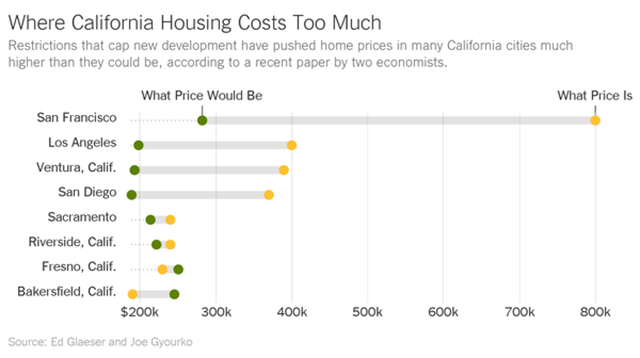 The long-view argument being made by the economists is that once upon a time, say pre-1960, houses cost pretty much the same everywhere, and this is highly debatable  event without getting into the uneven distribution of wealth prior to the rise of the American middle class, but during its various booms, as discussed here before, San Francisco has always been an expensive place to live, sometimes ridiculously so, regulations or not.

By their estimates and based on construction costs, land-use restrictions and other factors aside, houses should now cost about $200,000 apiece, on average, with sizes varying by local market, and due to higher demand/desirability, a San Francisco home should cost about $281,000. In reality, median home prices here (based on 2013 data) are closer to $800,000, and this, the economists argue, is due mostly to the costs associated with regulation.

The New York Times takes things further to say that if cities were to open the floodgates to development, "The economy would grow, and by a lot." They cite this paper by UC Berkeley economist Enrico Moretti and University of Chicago economist Chang-Tai Hsieh that suggests that land-use regulation is reducing the nation's overall economic output by 10 percent, or $1.5 trillion a year.

Also, mobility would increase as housing costs evened out from place to place, the economists argue  people would seek out job opportunities with less concern for cost of living, and you wouldn't see the same cachet for places like SF and New York.

But where's the fun in that? If every city were the same and none were more exciting or cool than the other, wouldn't this be, like, Belgium or something?

Related: San Francisco Has Always Been A Pretty Expensive Place To Live


via the New York Times

Brew up a cup worthy of the 21st century. If you still think of a Mr. Coffee brewer as the dull little drip coffee maker in the side office, think again. This Advanced