As a respite to the disheartening stories about refugees being stranded at airport, we offer an opera about a refugee stranded at an airport. And this one is a comedy, just what the doctor ordered, both politically relevant and fun. Opera Parallele presents Flight through Sunday at the Yerba Buena Center for the Arts. It's a 1998 opera loosely inspired by Mehran Karimi Nasseri, an Iranian exiled from his country who got his papers stolen on his way to London. As a result, he ended up living eighteen (18!) years stranded at Charles De Gaulle airport in Paris between 1988 and 2006. That Tom Hanks movie The Terminal? Based on the same guy.

Opera Parallele always picks modern operas with a ton of topical relevance, and their creative team (Nicole Paiement and Brian Staufenbiel) always puts together vivid musical performances and inventive and impressive stagings. Flight was written by British composer Jonathan Dove, and we chatted with him over the phone from his home in England. Dove penned Flight as a commission for the prestigious Glyndebourne opera house and it has since been produced many times all over the world, a rare feat for a modern opera.

How familiar are you with Opera Parallele, have you been in touch with them?

Not really. I've looked online when the question came in, if it was going to be possible for them to present the opera. It's been many years since I've been last been in SF. I'm not familiar with their work.

Your composing style has been compared to a blend of [Berkeley resident] John Adams and Leonard Bernstein. Is it a fair comparison?

I'm very happy to be compared to them. John Adams is the most exciting living composer. The strong connection between us is that, I've been influenced by him to a considerable extent, when I discovered that I really liked was music that had a pulse, with a strong rhythm, that's not chromatic, that's diatonic, or often modal, or pan-diatonic. I was not really in sympathy with the European avant-garde when I started writing. Boulez and Stockhausen were still producing at that point and in England, Birtwistle. George Benjamin is younger than I am, but he was producing work much sooner than I did. I wanted to make something different and I was surrounded by that. I felt closest to American composers, Adams and also Bernstein and Sondheim to an extent, who are not exactly opera composers. I grew up with influences from these two kinds of musical theater.

I think it's true the modernist language, modernist composers have not generally been interested in comedy. You'll find it quite hard to think of any comic opera for the whole of the 20th century. Arguably Albert Herring, and maybe some more recently...

We could not find much detail on the orchestration, is it written for a chamber orchestra?

Actually, it's written for a relatively large orchestra, it's not a chamber orchestra. But I did sanction a somewhat reduced orchestration a few years ago for a music college in Wales. I'm now racking my brains to remember if that's the version they are doing. I would imagine it is.

It was originally written for Glyndebourne opera company, which has a new opera house of about 1500 seats, and the orchestra matches that. It is somewhat spectacular, I would say, without sounding immodest. It's very colorful orchestration, it uses a lots of pitch, percussion instruments, and there are some moments where the orchestra tells the story. When the plane takes off in the first act, and comes back again in the last act, you can imagine those are noisy events. And throughout the second act, there is a storm. 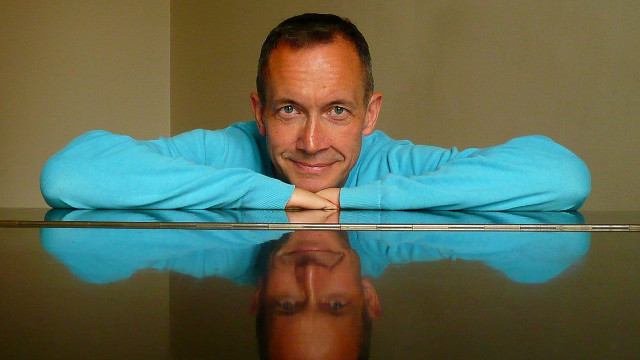 You were originally asked to write a modern "Barber of Seville," is it why you have a storm?

It's part of the plot of a group of traveler stranded in an airport overnight during an electrical storm. I was interested in what would it sound to have a comic storm. In the recent history, the great storm in Peter Grimes, the storm in Porgy and Bess, these are dramatic storms. Actually, the storm in Barber of Seville is quite dramatic, but this has a kind of different edge.

Why did you decide to make fun of this situation?

I thought it was missing. I also thought it was something that I could do. In the 1980s and 90s, in Britain, new opera was often quite earnest and solemn. Probably ambitious, but never funny. I had really enjoyed as a musician, as a repetiteur, working on production of La Cenerentola, Cosi fan Tutte, or Falstaff. I enjoyed hearing audience laugh in the opera house, I thought it's important part of life. And nobody was really doing it.

I thought my musical language, because it's not modernist, would be suited for a comedy. The modernist language -to simplify, as modernism is an enormous field- arguably handles better anxiety, or complex and darker emotions. Mine tends more to celebrate. That was the musical impulse to make a comic work. In a way, it's complicated by becoming fascinated with a true story that is not funny at all: the true story of the refugee who lived in Charles De Gaulle for 18 years, a very strange tale.

There are other stories of people living in airports, that one is the most extreme. When I came across it, it had a strong hold on me, I found it fascinating, and the airport location very idea-making. It was inspiring: what would an airport sound like? What would a plane taking off sound like in music? Because I had been thinking of comedy, some comic situations that were in my mind and which I had been talking with [librettist] April De Angelis, collided with the refugee story. It has a tragicomic element.

But isn't the theme somewhat less funny now: immigrants being held at border?

I think it has become even more topical. The last production in London was in 2015, that was before Brexit. But already then we were seeing on the news every day that refugees were going to extreme length to get into the country. There was even a recurrence of the story that the refugee describes at the end of the opera, it happened in London during the run of Flight in 2015, of somebody stowing away in the undercarriage of an airplane and they didn't survive the journey. In the opera, the story that the refugee tells is not that of Mehran Nasseri, the real life refugee in Charles de Gaule, it's the story that has really happened of two brothers stowaways. That's unimaginable, with the noise, the cold. Is it possible to go into a kind of suspended animation in extreme cold temperature and to survive the flight? In this case, one of the brothers survived, and the other did not. That's a heartbreaking story happening at the center of it.

Immigration is certainly an interesting subject in America. Within the opera, the refugee presents a challenge, a dilemma for the travelers. It might feel that they want to help him, but they are much more preoccupied with their own issues, their own journey, their own luggage. To begin with, nobody wants to help the refugee. By the end, because of all that happens, they all do want to help the refugee as far as they can. It's not a magical ending, it's not the happiest ending imaginable, it's realistically happy. The immigration official quite unexpectedly decides he will turn a blind eye to the refugee. All the travelers who get involved in some way with the refugee try to help and attempt to prevent him from being deported. At the end of the opera, he doesn't get into the country, he doesn't get his new life, but he isn't sent home. It's a happy-ish ending for him.

I've no idea what point Opera Parallele is going to make with it. Within the narrative of the opera, there is a challenge. The refugee represents a moral challenge to which people may or may not rise. You could say: refugees challenge us and we may or may not behave well in relation to that challenge. I would be interested to find out what happens in this production.

What was the point of the homosexual interlude between two straight guys?

I has to do with the idea of adventure; a couple, Bill and Tina, are going on holiday to try to recapture something that has disappeared from their relationship. The wife provokes the husband because she says he used to be adventurous. Through a misunderstanding, he ends up having a liaison with the steward. I think it's funny. The stewardess is also an erotically active character. It's quite hard to have a successful liaison in an airport, there isn't anywhere to do it. The steward and the stewardess end up being discovered, the steward and Bill end up in the control tower. That's dealing with the environment of the airport, how impractical a place it is to have a liaison. You don't know what's going to happen between Bill and Tina afterwards, it's possible that they will be fine, or that adventure will have no difference. At the end, they are going off together. So it acknowledges the complexity and unpredictability of human relations. Relationships don't necessarily fit into comfortable patterns.

You are a prolific opera composer, what's the next one about?

I'm writing a comic opera, in my mind it's a comedy, about Karl Marx. For Bonn, a German opera house, next year. I guess it's what I do mostly. I've written around 28 operas, it's the main focus of my activity.

Check it out! The long-vacant Home Restaurant building has disappeared at Church and Market, about a week after demolition began. This triangular pile of rubble, bounded on the back side by 14th Street,

Okay, so maybe Emma Watson didn't really go to Hogwarts like her famous Harry Potter character, but she did get her degree from prestigious muggle school Brown University and could totally work at

—
Composer Jonathan Dove Discusses 'Flight,' His 1998 Opera About A Refugee Trapped In An Airport
Share this