A leading figure in the American street photography movement of the 1960s, Danny Lyon is able to find beauty in the starkest reality, and to provide a charged alternative to the bland vision of American life often depicted in the mass media. 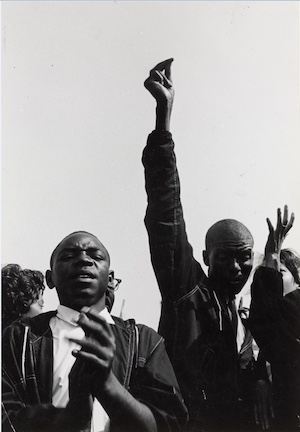 Danny Lyon: Message to the Future explores a range of Lyon’s subjects: abandoned street children in Colombia; the political turmoil in Haiti; the chaos of life in the booming, polluted industrial outposts in China; and, most recently, the Occupy movement in New York, Los Angeles, and Oakland.

Inspired by the prose of Beat Generation writers, photo scrapbooks of his immigrant father, and by the unvarnished realism of photographer Walker Evans, Lyon developed a restless, compassionate vision.

This is the first comprehensive retrospective of Lyon’s career to be presented in 25 years and includes approximately 175 photographs, related films and ephemeral materials.

See Danny Lyon: Message to the Future, open now at the de Young.

This post is brought to you by the de Young.

—
What Will Your Message To The Future Be? See The New Danny Lyon Exhibition At The de Young!
Share this