As we reach the two-month mark on the Soberanes Fire, burning just inland of Big Sur and sparked miles to the north on July 22, the Associated Press reports that the fire has officially surpassed the Biscuit Fire of 2002 as the most costly firefight in US history, now topping $2 million. That fire of 14 years ago burned across state lines in California and Oregon, and was the result of the combining of two separate wildfires that ultimately burned almost a half million acres of the Siskiyou National Forest, taking almost six months to be fully contained. Perhaps because of its proximity to a highly treasured state park and groves of ancient redwoods, the Soberanes Fire has been extremely costly to fight despite it only being two months in and a fraction of the size, at 121,050 acres as of this morning.

The cost is attributable to having to hire so many firefighters for daily work, with thousands simultaneously fighting the fire at its peak over a month ago. Per the AP, the the firefight was costing $8 million per day at that point. The total as of now is $206.7 million, which does not include damages to structures or homes  because the fire has been burning in rough, largely uninhabited terrain along ridges east of Big Sur in and in the Carmel Valley, the number of homes destroyed has remained the same for over a month, at 57.

2,020 firefighters remain on site, and it is 71 percent contained as of Tuesday, September 20. Firefighters are still aiming for full containment in the next ten days, by September 30.

Compare the new map below with this one from a week ago. 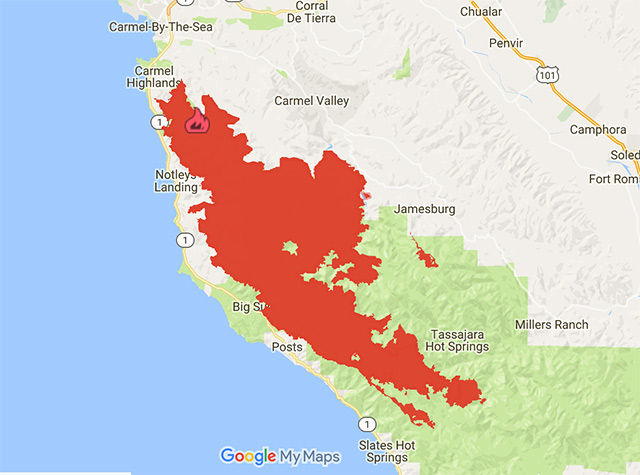 The fire was sparked by an illegal campfire in Garrapata State Park reported by hikers on July 22 which had already spread out of control by the time the first firefighters arrived at the location. It quickly began spreading south and caused the most of its destruction, which included one fatality from a bulldozer accident, in its first three weeks. Since then it has been burning slowly through chaparral, grass, and some of Pfeiffer Burns State Park before moving primarily into the Los Padres National Forest, where federal firefighting authorities took control of the firefight from Cal Fire in mid-August.

The Soberanes Fire, as noted before, is burning through much of the same territory that burned in the Basin Complex Fire of 2008, as well as the Marble Cone Fire in 1977.

The 2002 Biscuit Fire ended up costing $165 million and burned from mid-July until December 31 of that year  though adjusting for inflation could put the costs in similar territory.

All previous coverage of the Soberanes Fire on SFist.

Shaved snow is in the forecast this week, with the Taiwanese-style treat — somewhere between shaved ice and ice cream — arriving at a permanent spot on the Divisadero corridor this Friday. So far, the