Neighbors of Duboce Park are sharing concerns via social media today that poisoned meatballs have been discovered in the popular dog park, and that one dog may have already died as a result. If confirmed, this would not be the first time that a park frequented by pet owners has been targeted — poisoned meatballs were discovered around Twin Peaks both in 2013 and 2014 — leading to the death of at least one dog.

Be careful if you walk your dog in Duboce Park in SF: someone is leaving poison meatballs in the area.

SFist reached out to Animal Care and Control Captain Denise BonGiovanni to determine if any meatballs had actually been discovered on the ground. BonGiovanni, who investigated both the 2013 and 2014 cases, informed SFist that her offices "are getting third-hand information that there may have been a poisoning, and we're trying to reach the owner [of the allegedly sickened dog] now."

BonGiovanni told SFist that although it had not been proven conclusively, the 2013 and 2014 cases appeared to be the work of the same individual, and that it was likely rat poison stuffed inside the meatballs. No one has been apprehended in either of those cases.

A tipster sent SFist the below screengrab of a conversation on social media app NextDoor (we blocked out the names of the people), which suggests that at least one dog may have already died from eating poisoned meatballs found in Duboce Park. 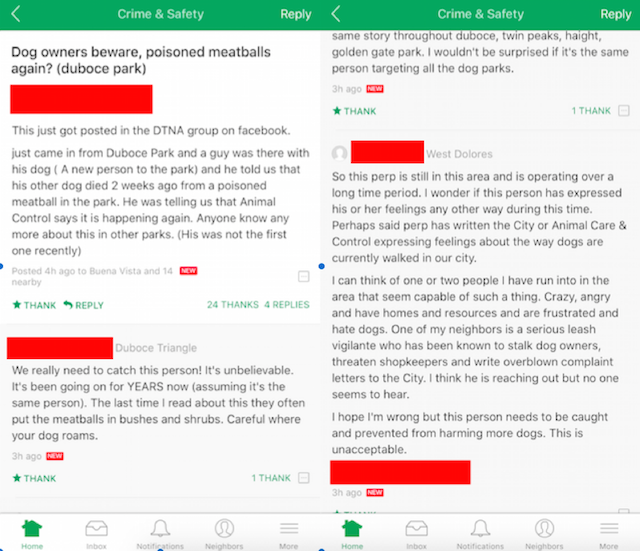 Again, it should be noted that at this time the reports are still unconfirmed, but with the stakes for animals lovers and their pets so high we thought it important to bring you this news. We'll update this post when more information becomes available.

Home restaurant once occupied a triangular parcel at the intersection of Market and Church at 2100 Market, but after that closed in 2011, getting someone or something on the premises — other than squatters

"The annual homeless crisis came to San Francisco early this year," the Chronicle's Abe Mellinkoff wrote on October 16th, 1986. "Usually we don't hear much about it until the weather really turns cold.