NEMA apartments, a luxury development that describes itself as a "design-driven lifestyle pioneer," has been accused of representing a kind of modern-day castle. If so, it's found an appropriate match with a semi-private driver for its tenants: shuttle startup Chariot. From NEMA, Chariot will follow one route, direct to Caltrain.

Yes, tenants of the apartment complex, which was built for $300 million at 10th and Market, can forget about walking that one block down to catch the 47. Instead, an email announcing the service promises them a "straight drive from NEMA to Caltrain every morning without any other outside riders."

That's also the promise of Chariot, a Muni-alternative who have laid relatively low to avoid the torch- and pitchfork-wielding shuttle bus haters. But now Chariot appears to be expanding with more of its punnily named "crowdsourced" routes, like Sun-Set-Go and Mission Possible.

In the email to NEMA residents, who are being offered the pilot program for the next month to gauge interest, Chariot says it's okay to call its 14-seater vehicles what they are: vans or buses. They also have a fun name for their drivers, "Charioteers." Charioteers, thank god, are employees. 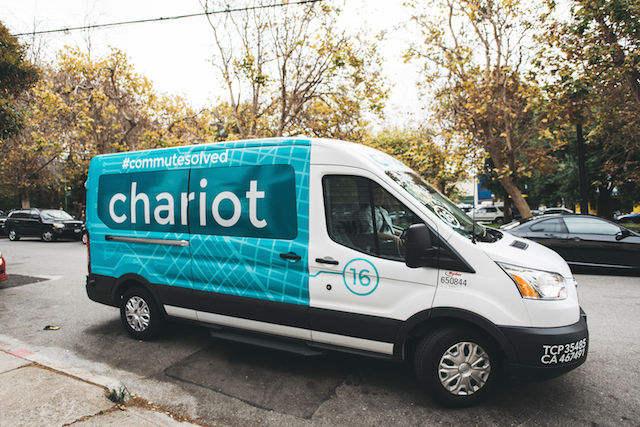 As goes the promotional sign still plastered to the building's first floor windows, NEMA is all about "Amenities, Not Enemies," and Chariot may be a welcome one. The building rose to its status as gentrification synecdoche with an ill-advised, very whitewashed advertisement video — a display that even outraged actual NEMA tenants who said they were misrepresented.

Since then, NEMA's developer, Crescent Heights, is possibly selling a minority stake in the building, and is also behind sister development the Jasper.

Don't expect to see too many signs for Chariot outside NEMA, though. The Examiner reports that the sandwich board signs on sidewalks indicating Chariot stops are not at all permitted according to the Department of Public Works.

“Chariot has no permits with us for A-Frames,” spokesperson Rachel Gordon told the Ex. Public Works has sent a "corrective order" to Chariot: The fine is $300 per sign, and there do seem to be a great many of them. That could add up to a princely sum.

A BMW was in a serious crash with another vehicle just after noon today on the Embarcadero near Bryant Street, leaving three people injured, two of them critically. As KRON 4 reports, via