While delays continue in completing just the short piece of bike path that would connect the Bay Bridge's eastern span's existing bicycle and pedestrian path to Treasure Island, the brainstorming and design phase is beginning for what could be an extremely costly bike path all the way to San Francisco. KQED picked up the story via a public workshop that took place January 20 in which some potential design options were floated, and the feasibility of the entire project was debated. Suffice it to say, getting bikes and pedestrians onto the main, western span of the bridge, and then getting them off it on the other side, is going to be hugely complicated. And some of the possible options look insane.

The full handout from the workshop can be found here, and bear in mind that the Metropolitan Transportation Commission and the Bay Area Toll Authority are saying that building any structure to span that 2.9 miles between Yerba Buena/Treasure Island and SF could take at least a decade. But you have to start somewhere, and you start with whether we're going to attach a fifteen-foot-wide structure  five feet each for east- and westbound bikes, and pedestrians  to the side of the historic western span, or whether a new suspension super-structure should be added to float above the upper deck of the bridge, sort of like how the Brooklyn Bridge in New York has for its pedestrian and bike path. 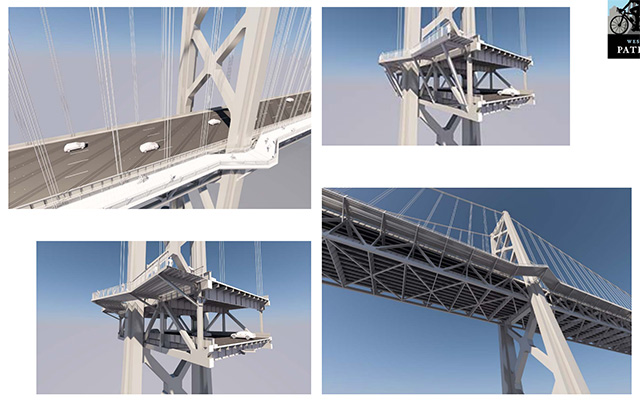 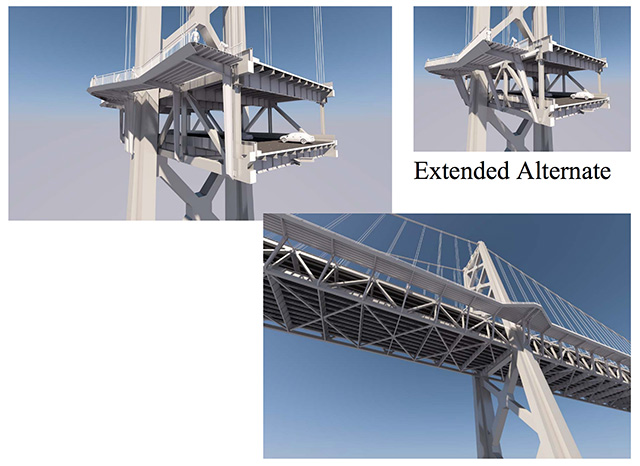 A second option would be a similar cantilevered path, but with less obtrusive supports. 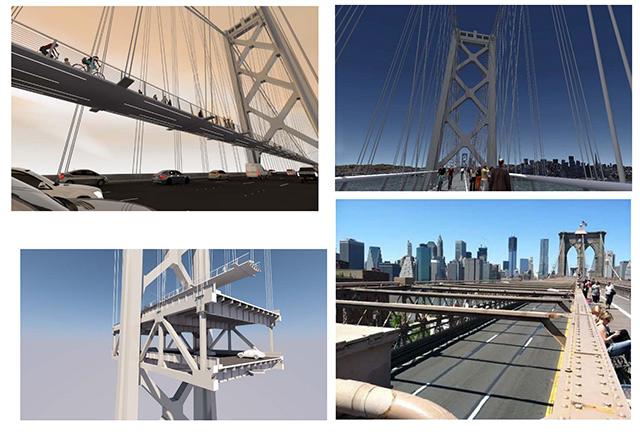 Obviously the most attractive and expensive option is the elevated deck, allowing bicyclists and pedestrians to glide above the lanes of traffic, with Brooklyn Bridge for comparison. This could require its own suspension system.

Then comes the decision of where the path will touch down in San Francisco  and the closer you get to the waterfront, the greater the distance from ground to bridge. Thus you have the touchdown ramp up at the top which is enormous, because it would bring bicyclists off the bridge closer to the Embarcadero.

This option would be the easiest and cheapest, probably, bringing cyclists and walkers all the way down the Essex Street off-ramp. 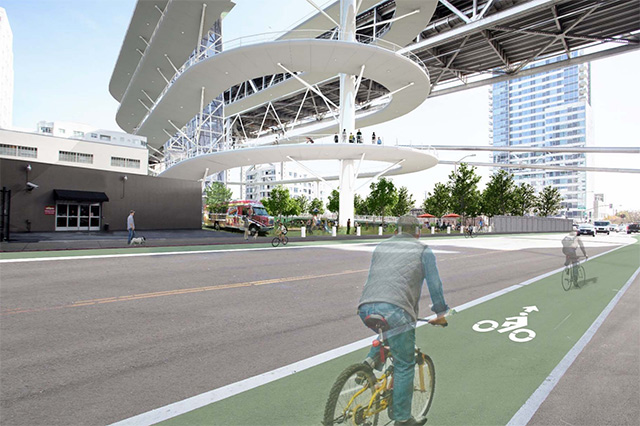 Another option involves a much bigger ramp structure that would touch down near Bryant and Beale on existing Caltrans property. 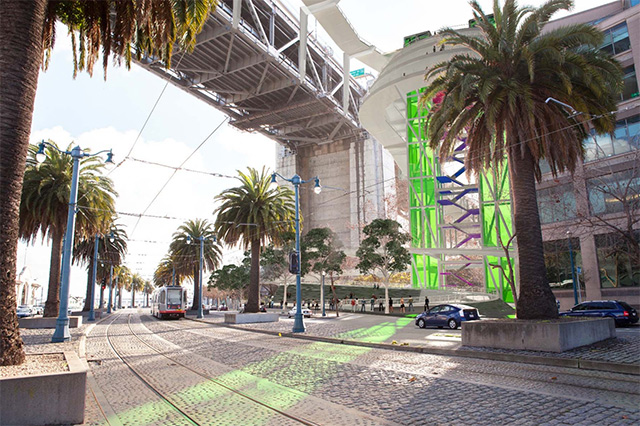 And there's this option, bringing bikes down many stories to the Embarcadero, complete with neon?

As you can see, there's a lot to consider, and none of this has been costed out. And let's not even start on the inevitable fights about the aesthetics of this thing, especially if they start considering one of those enormous, highly visible ramp options.

Bicycle use on the Bay Bridge is projected at about 10,000 people per day, and that may not even be including 2,000 more who'll be moving into new residences on Treasure Island.

So, even though this could take another 10 years and many millions of dollars, Renee Rivera of Bike East Bay tells KQED, "Even two years ago, I wouldn’t have thought we’d be where we are. It seems crazy to be excited about something that’s not going to happen for 10 years, but the thing is we’ve been working on this for maybe 25 years already.”

In fact, the Bay Area Toll Authority last did a feasibility study for a bike path in 2002.

First things first: They're still hashing out the design of the eastern span connector to Yerba Buena Island, and construction on that may begin this year, or it may not.

One concept, in which a cantileverd path is propped by diagonal supports off the side of the bridge.

San Francisco does not care about Bud Light. Not even during the Super Bowl. pic.twitter.com/PYpDv5OE6t— Kurt Varner (@kurtvarner) February 3, 2016 While football may be America's pastime, reveling in trucks

Out of all the spin thrown at us prior to Super Bowl 50's landing in the Bay Area, there was one bit that, on the face of it, seemed possible. The promise, as