No one expected Ed Lee's third inauguration today to go perfectly smoothly, and we already heard this week that protesters of the December death of Mario Woods at the hands of SF Police would be there to disrupt it however they could. But the scene at City Hall today was a total mess, from the sound of it.

While some protesters had signs and shouts of protest directed at the mayor, cries of "Fire Chief Suhr" were popular as well. 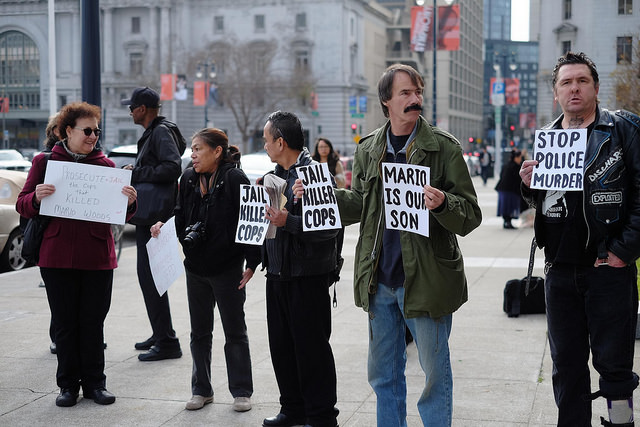 In anticipation of the protests, as the Examiner reports, protesters were restricted from certain areas of the City Hall rotunda, and were mostly cordoned on the second floor. The paper describes the protests as being quieted by sheriff's deputies in riot gear, who also confiscated signs, but some tweets and video indicate that they were fairly disruptive.

Also, former mayor and now Senator Dianne Feinstein was there to throw a little bit of shade in Mayor Lee's direction, in her brief speech, vis a vis the tension of the protest. "I think I can say it’s good to be home, but I’m not too sure about that," Feinstein said. “I took this oath three times as mayor. It’s the best day there is. I am not sure about this day being that. But I want you to know that as the 43rd mayor I wish you all of the best."

Ed Lee booed while taking the oath of office, given by gov Jerry brown

This inauguration turning out worse for Ed Lee that I imagine he could have even feared. Nonstop chants in protests of him and chief Suhr

Ed Lee: Slouching Toward City Hall. The mayor is booed heartily during his inauguration. And now the fun begins: https://t.co/togPNWT81w

Many men may enter, but only one will leave with the crown. None, however, shall exit with his dignity. Yet judging by this year's crop of bro brethren, there wasn't much of that

SF County Jail No. 2 Pod E serves as the music venue for a new live album by jazz and soul artist Naima Shalhoub, and it's titled Live in San Francisco County Jail.