SF County Jail No. 2 Pod E serves as the music venue for a new live album by jazz and soul artist Naima Shalhoub, and it's titled Live in San Francisco County Jail. Recorded for Mother’s Day in front of 50 incarcerated women locked up at County, Live in San Francisco County Jail is a compelling and heart-wrenching live album, and quite beautifully engineered considering it was recorded in jail — a jail where 85 percent of the incarcerated have not even been convicted of a crime, according to the public defender's recent figures.

The obvious comparison here is to Johnny Cash at Folsom Prison, but this album is nothing like the Johnny Cash album. Naima Shalhoub’s songs are not jailhouse anthems about shooting that warden or shooting that woman down. These are melodic, uplifting soul tunes that you would take your mom to hear on Mother’s Day, peppered with jazz-backed poetry written and read by incarcerated women plus the improvisational stylings of Rhodessa Jones from the Medea Project (who’s featured in a free lecture tonight at Glide, if incarcerated women’s issues are your thing).

Live in San Francisco County Jail is previewed in the 12-minute video below, which I dare you to watch without getting completely choked up.

SFist spoke with Naima Shalhoub, whose music classes with women incarcerated at SF County served as the basis for this album. “A lot of the [songs], I had been singing with the women every week,” Ms. Shalhoub told us. “A lot of them were constantly on request from the different women in the class. ‘God Bless the Child’ I sang a ton. ‘Todo Cambia’, the song by Mercedes Sosa, I sang frequently.”

“The songs ended up choosing themselves,” she said.

The songs chose themselves during a year’s worth of weekly sessions where Ms. Shalhoub would shlep her ukulele down to SF County B Pod every Friday from Noon to 1 p.m. to play cover songs and originals. The locked-up ladies’ requests ironically skewed towards freedom songs and liberation songs. “To sing those type of songs in a jail or a prison, where it’s the exact opposite, it’s all about isolation and confinement, that experience was extremely powerful and visceral,” she told us.

The result is a jailhouse record whose songs don’t really feel like prison songs, they’re mostly uplifting and inspirational numbers. “I could go in and talk about doomsday all I want, but I get to go home to my comfortable apartment. So I had to really shift my lens of what freedom means in this context for these women,” Ms. Shalhoub said. “Yes, it was important to have the freedom to talk about the system and racism and sexism and classism and all these things, but what I found the women appreciated most was to feel uplifted.” 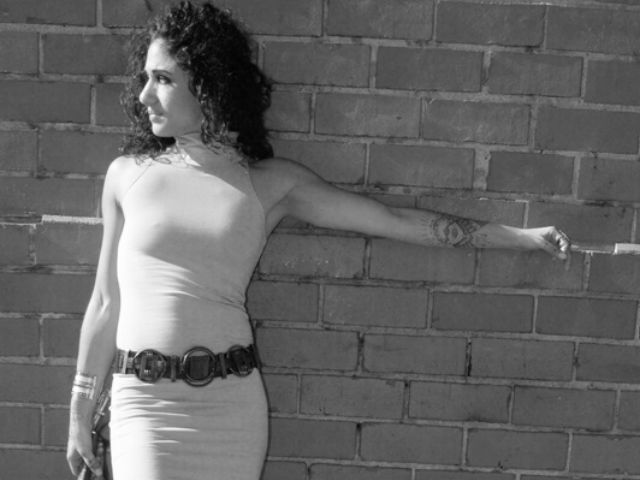 A plan was eventually hatched to record one of her sessions as a Mother’s Day concert, complete with a four-piece jazz band. “I wanted the women in my classes to want this,” she told us. “It’s a vulnerable situation to come in with cameras and recording equipment when you don’t necessarily have a choice. We made it be a choice.”

“We were approved to have an open mic and have their voices recorded in the room,” she said. “So it’s an honor to get other people’s voices out there that don’t have the privilege to be out there themselves.”

One of the open mic, spoken word jailhouse poets featured on the record is Tameika “Chocolate Chip” Smith, reading poetry she wrote right there in the joint. “It’s a bittersweet thing because I knew that any woman that was going to be a part of it, they were also doing time,” Ms. Shalhoub admitted. “Tameika in the past had mentioned that one of her dreams was to meet the president and to share her poetry with as many people as possible. So I’m hoping with this project that her voice gets out there.”

“There is so much talent behind bars, it’s maddening,” she said. “I just continue to meet so many talented women behind bars.”

Live in San Francisco County Jail is available on Bandcamp for $10 as a digital download or $15 for a physical CD with a 6-page digipak with photos, with half of the profits going towards support programs for incarcerated women.

No one expected Ed Lee's third inauguration today to go perfectly smoothly, and we already heard this week that protesters of the December death of Mario Woods at the hands of SF Police

Welp, it sounds like Chronicle columnist C.W. Nevius's choice to write about a recent incident in which he failed to pay for his Muni ride, got busted, and then didn't get a

—
Someone Recorded a Live Album At SF County Jail
Share this