The Giants and A's complete their inter-league schedule this weekend with a symbolic bow to the last 15 years of Bay Area baseball history. Saturday’s A’s-Giants pitching matchup will reunite Tim Hudson, currently the winningest active major league pitcher, to face A’s legend Barry Zito, arguably the worst free agent deal in baseball history who eventually saved face to help the cross-bay Giants win a championship. Both pitchers have had glorious and complicated histories with both franchises these past 15 years, and Saturday’s 1:05 p.m. game at O.co Football-Baseball Mashup Coliseum in Oakland will essentially mark the end of each player’s Major League Baseball career.

Neither Hudson nor Zito would acknowledge this being his last or second-last major league start, but this is likely both guys’ last or second-last major league start. Hudson has announced he’s retiring after the season but is in the current rotation for one more start after Saturday. (Unless the Giants still make the playoffs! And if the spot-starting Hudson, who’s been starting only the last two weeks, remains a starter. The Giants are all but out of the wild-card race and seven games behind the Dodgers in the division race with 11 games remaining. The Cubs are not blowing a 9.5-game wild card lead with the Reds and the Brewers on their schedule, so beating the Dodgers for the division title is the Giants’ only plausible path to the playoffs. But I digress.) Zito, meanwhile, is being trotted out by the A's just to sell tickets. He’s been in Triple-A Nashville all year, much of that time on the disabled list. He’s finished.

Saturday’s matchup is being critiqued as a nostalgic A’s publicity stunt, but it’s a publicity stunt both teams’ fans should revel in happily. After all, both pitchers started critical World Series wins for the Giants, Zito in 2010 (Game 1 of The Sweep) and Hudson in 2014 (the decisive Game 7 completed by Bumgarner on short rest). And Hudson and Zito were Big One and Big Two in the glorious Big Three era for the A’s (2000-2004), the “Moneyball” period and the last time the A’s posted consecutive 100-win seasons.

Barry Zito, a three-time All-Star and 2002 Cy Young winner, bolted Oakland in 2007 to sign with the Giants for a then-record $126 million contract for 7 years. He was a dismal and massive albatross on the franchise, a losing pitcher for 6 of those 7 years. This blog had regular fun at Zito’s expense when he got sent back to the minor leagues and endured the humiliation of being left off the Giants 2010 playoff roster. The Giants would win the World Series that year without Zito, their highest-paid player.

Yet Zito and the Giants were still contractually stuck together for a long-ass time. Zito recovered for his only winning season for the club in 2012, then won Game 1 of the World Series in an upset over vaunted Detroit Tigers ace Justin Verlander. The Giants would sweep the Tigers, so Zito ultimately got a ring for his only career World Series start that few thought he could win. 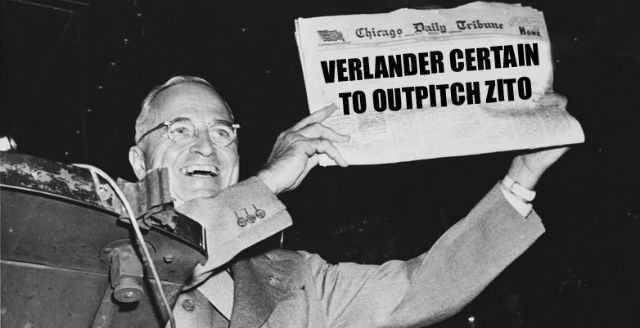 Tim Hudson was traded to the Braves by Billy Bean in 2005, got hurt, had Tommy John surgery and came back as the NL Comeback Player of the Year in 2010. Hudson signed with the Giants for the 2014 season, pitched Game 7 of the World Series and closes out his career with the Giants this season.

For the A’s, Saturday’s Hudson-Zito farewell game is a fan-friendly end to Billy Bean’s worst season as GM. For the Giants, it’s meaningful because all their games are now meaningful. Every Giants game is an elimination game if this hobbled Frankenstein of a Giants team has any path to the playoffs. Despite the nostalgia factor, the Giants need to win every game possible right now, including this publicity stunt nostalgia game.

Saturday’s A’s-Giants game is at 1:05 p.m. at O.co Coliseum, with the TV broadcast on Comcast SportsNet Bay Area. On Sunday, both Hudson and Zito will throw out ceremonial first pitches as will former Big Three teammate Mark Mulder for the 1:05 game.

Kink.com performer Daisy Ducati stars in this video, a parody take on Rihanna's "Bitch Better Have My Money" titled "Bitch Better Lick My Honey." And, yes, actual honey is involved. Also, there

Hey, what are you up to for the next hour and seven minutes? Want to watch Mayor Ed Lee face the San Francisco Chronicle's editorial board? Then do I have a video for