The devastating Valley Fire, which touches three counties  Lake, Napa, and Sonoma  grew to 67,000 acress from 61,000 since yesterday, and Cal Fire now says it is 15 percent contained. As of Monday night, KCRA and the Chronicle were reporting that the toll of destroyed homes had reached 585, and we have more information on the single fatality that occurred as the fire swept through Middletown over the weekend. Also, a 3.2 magnitude quake struck the area early this morning, however such quakes are common given the proximity of The Geysers.

The sole lost life in the fire was 72-year-old retired teacher Barbara McWilliams, who KRON 4 reports had advanced multiple sclerosis and apparently died a pretty horrific death, unable to escape her home as the flames advanced. A 30-year-old caretaker, Jennifer Hittson, was the last to speak to McWilliams, having left her at her home in the Anderson Springs community at 3 p.m. that afternoon. Tellingly with regard to the speed at which the fire spread, Hittson tells the Press-Democrat McWilliams was calm when they spoke around 6:30 p.m. "I don’t think she realized (the fire) was a threat," Hittson said. By 7:20 p.m., however, flames engulfed McWilliams' home by the time rescuers tried to get to it. Her remains were found later in her entirely burned out residence where "the only recognizable things left ... were the flagstone chimney, a singed air conditioning unit and a toppled metal garbage can."

A neighbor had apparently offered to drive McWilliams into Middletown, but she refused.

Additionally, four firefighters suffered second-degree burns in the conflagration on Saturday, and are being treated.

The map below shows the current progress of the fire, via Cal Fire. Currently 2,362 fire personnel are working to ensure public safety and begin to contain the fire, with some of those firefighters coming from the nearby Butte Fire in Amador an Calaveras Counties, which has now topped 70,000 acres and is almost 40 percent contained. 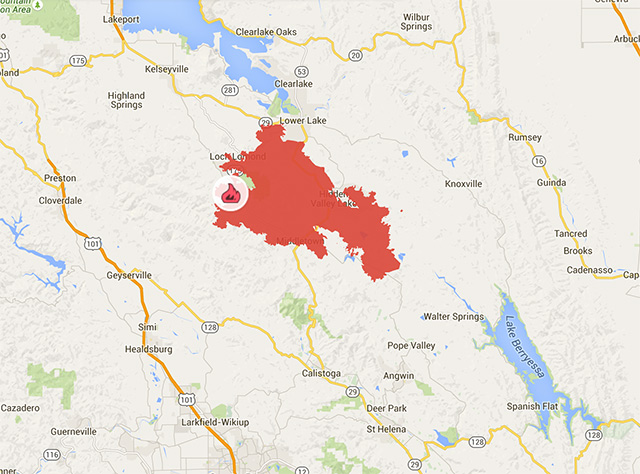 The Examiner reports that a total of seven SF fire engines have responded to the Valley and Butte fires, as well as a strike team from San Mateo County.

The local wine industry has also been impacted, with at least two Lake County wineries suffering fire damage. Inside Scoop reports that Shed Horn Cellars is entirely destroyed, and Langtry Estate in Middletown lost one of its buildings. Also, winemakers in the entire region, including northern Napa, could see potential impacts of smoke damage to any grapes left on the vine, much like some Anderson Valley wineries saw from fires in 2008, but an unusually early harvest this year means that many wines won't be affected.

The video below shows the perspective of some residents fleeing the area on Saturday, and it's cued up to where a nearby Shell gas station explodes in the middle distance.

The cause of the fire remains under investigation, and this is the third devastating fire to strike the county during this especially fire-prone season.

A group of kayakers paddling around Monterey County's Moss Landing had a way-too-close-for-comfort encounter with a humpback whale Saturday, when the massive beast leaped out of the water and onto, well, them. According

Rain A photo posted by ioi_ka (@ioi_ka) on Sep 14, 2015 at 8:13pm PDT Though yesterday's brief rain shower was met with a thrill of excitement from parched San Franciscans,

—
More About The Only Fatality In The Valley Fire As It Grows To 67,000 Acres
Share this