The Twin Peaks panoramic lookout point is an iconic place to take visitors and out-of-towners, particularly for those of us way too snobby for Alcatraz or Fisherman’s Wharf. The views up there are, actually, magnificent. The infrastructure, not so much. The top of Twin Peaks Boulevard is confusing as hell for motorists, outlandishly dangerous for bicyclists, and its Nixon-era hiking trails wallow in disrepair and non-ADA compliance. What’s more, a fluttery little endangered scamp called the Mission Blue Butterfly has gone damn near extinct in the area.

SF Rec & Parks is moving forward to redesign the Figure 8 road atop Twin Peaks, most likely in a partially carless configuration that reserves one side for pedestrians and bikes only. Every day would be Sunday Streets on one half of the Twin Peaks Boulevard Figure 8 seen below, while cars would still be allowed to use the other half. 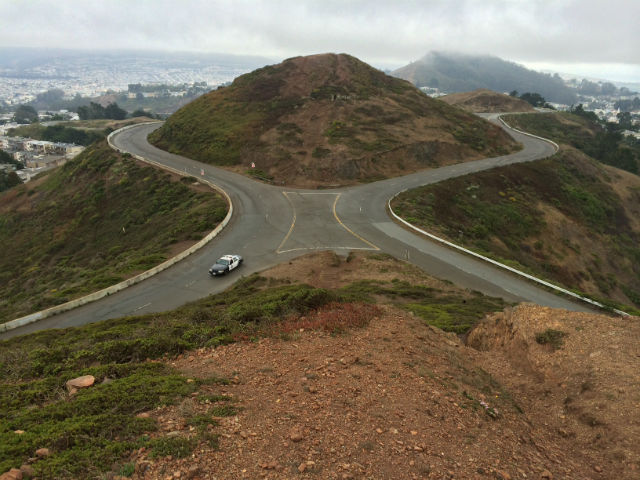 But which side gets which? Rec & Parks has produced five different designs for you to vote upon, and you can submit your input via this online survey that remains available until July 17. "The Department's main motivation for partnering with SFMTA and SF Public Works is to generate a concept design for the Twin Peaks Boulevard that will provide safe crossings and minimize the interaction of pedestrians and vehicles as well as to improve connectivity for our hiking trails throughout Twin Peaks," SF Rec & Park deputy director Connie Chan told SFist. "In addition, Bay Area Ridge Trail is proposing to reroute the Trail from the neighborhood streets west of Twin Peaks onto the Department's trails so we are working in partnership with Bay Area Ridge Trail on this project as well."

Let’s take a look at all five potential redesigns to help decide which ones get voted off the island and which one gets voted into reality atop the Twin Peaks lookout. These are not exactly 3D renderings, but I think you people can pretty much get the gist. 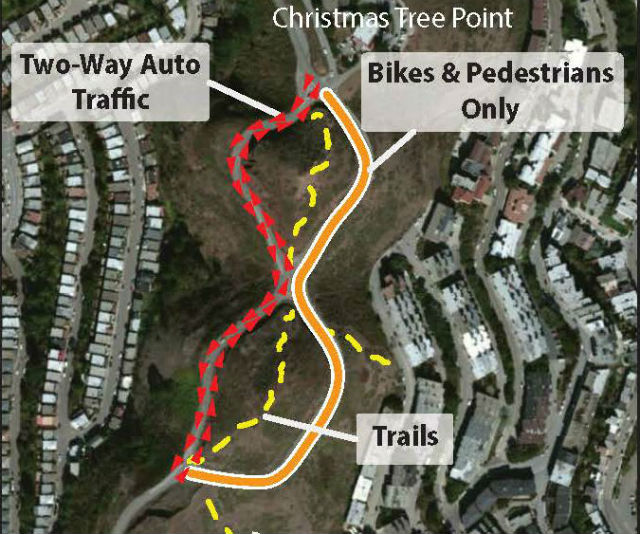 The early frontrunner appears to be the Figure 3 design, based on the fact that it ‘figures’ most prominently in the Rec & Parks slides and survey. Here we see pedestrians and bicyclists getting exclusive access to the eastern portion of Twin Peaks Blvd. that faces the Bay, protecting them somewhat from the harsh winds. Motorists get to drive both ways on the western Sutro Tower side, but the carless poors get the magnificent city view all to themselves. How totally San Francisco! 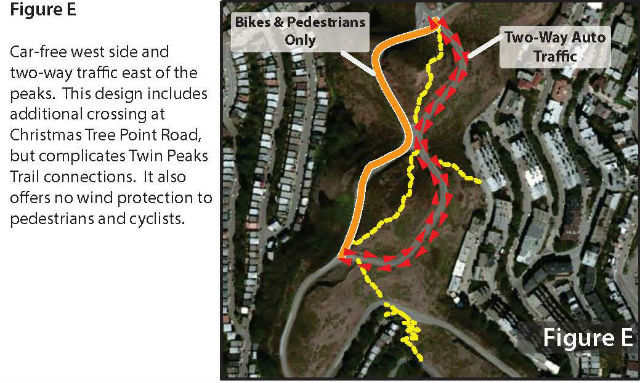 The Figure E design is essentially the opposite, giving motorists and busloads of tourists exclusive rights to the bay side that has all the breathtaking views of the city. Meanwhile, pedestrians and bicyclists get the ocean view side and all of its punishing winds. 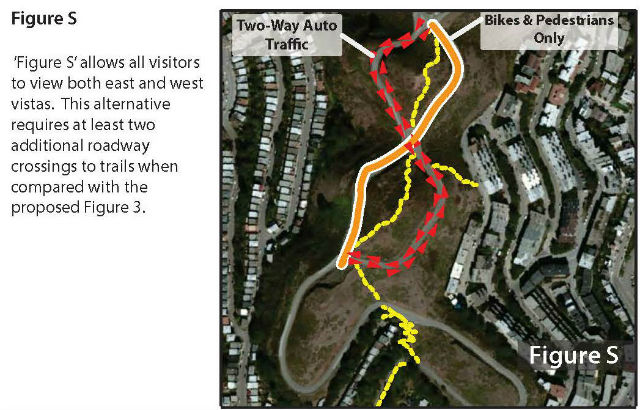 Here we have a compromise decision that splits the baby and gives motorists one peak of vista and pedestrians the other. The Figure S design also promises all manner of hilarious confusion for out-of-towners trying to navigate its center. 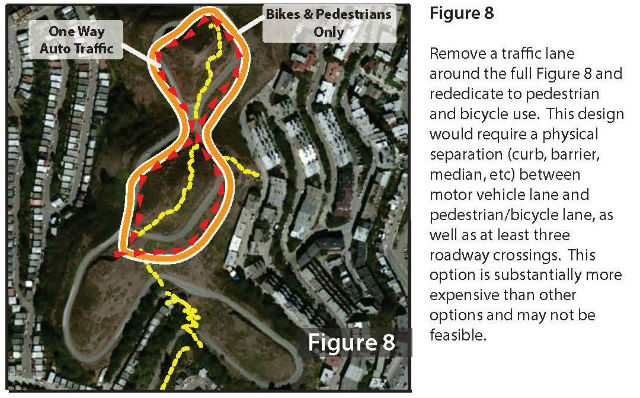 A modified Figure 8 design retains the current Figure 8, but with only one lane of one-way automobile traffic. Bikers and walkers get the outside lane to themselves, with barriers implemented. This option comes with a much higher price tag and a great deal of construction. If that doesn’t chase off the butterflies for good, I don’t know what will. 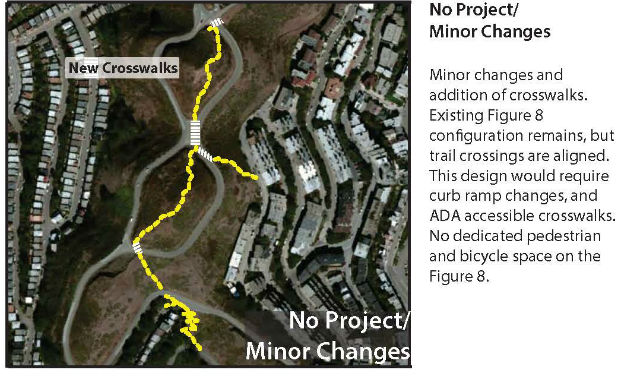 Rec & Parks is also proposing what amounts to a ‘Do Nothing’ option, maintaining the status quo and just adding some crosswalks on the street. This option appears to require nothing more than about four gallons of white paint.

I should note that nothing will change at Christmas Tree Point, the panoramic viewing spot where you take your visiting lookie-loo tourist friends and family members. These proposed changes only relate to the sections of Twin Peaks Blvd. surrounding the peaks. Apropos of nothing, I will also note that the Spanish conquistadors originally named Twin Peaks “Los Pechos de la Chola”; which means “Breasts of the Indian Maiden”. So there’s some trivia for you to ‘bust’ out while entertaining tourists up there.

The Twin Peaks Figure 8 Redesign Survey will remain available online until Friday, July 17, but we also invite your feedback in the form of talking shit in the Comments below.

According to an announcement made this afternoon on Reddit by board member and Y Combinator President Sam Altman, Ellen Pao, who has been the interim CEO for the San Francisco-based network of "subreddit"

"While you were sleeping" as the video puts it —or perhaps not, since as a new study says SF doesn't do that — skateboarder Daron Anderson was tearing across town. Things are a little

—
Half of Twin Peaks Blvd. To Go Carless; You Can Decide Which Half
Share this