According to an announcement made this afternoon on Reddit by board member and Y Combinator President Sam Altman, Ellen Pao, who has been the interim CEO for the San Francisco-based network of "subreddit" forums since last year, has resigned from the company "by mutual agreement."

Pao, known most prominently for bringing light to issues of gender discrimination in the workplace  despite losing her case against the venture capital firm Kleiner Perkins earlier this year  will be replaced by OG Reddit CEO and one of the site's founders, Steve Huffman.

Here's the language of the announcement.

Ellen Pao resigned from reddit today by mutual agreement. I'm delighted to announce that Steve Huffman, founder and the original reddit CEO, is returning as CEO. We are thankful for Ellen’s many contributions to reddit and the technology industry generally. She brought focus to chaos, recruited a world-class team of executives, and drove growth. She brought a face to reddit that changed perceptions, and is a pioneer for women in the tech industry. She will remain as an advisor to the board through the end of 2015. I look forward to seeing the great things she does beyond that.

We’re very happy to have Steve back. Product and community are the two legs of reddit, and the board was very focused on finding a candidate who excels at both (truthfully, community is harder), which Steve does. He has the added bonus of being a founder with ten years of reddit history in his head. Steve is rejoining Alexis, who will work alongside Steve with the new title of “cofounder”.

A few other points. Mods, you are what makes reddit great. The reddit team, now with Steve, wants to do more for you. You deserve better moderation tools and better communication from the admins.

Second, redditors, you deserve clarity about what the content policy of reddit is going to be. The team will create guidelines to both preserve the integrity of reddit and to maintain reddit as the place where the most open and honest conversations with the entire world can happen.

Third, as a redditor, I'm particularly happy that Steve is so passionate about mobile. I’m very excited to use reddit more on my phone.

As a closing note, it was sickening to see some of the things redditors wrote about Ellen. [1] The reduction in compassion that happens when we’re all behind computer screens is not good for the world. People are still people even if there is Internet between you. If the reddit community cannot learn to balance authenticity and compassion, it may be a great website but it will never be a truly great community. Steve’s great challenge as CEO [2] will be continuing the work Ellen started to drive this forward.

[1] Disagreements are fine. Death threats are not, are not covered under free speech, and will continue to get offending users banned.
Ellen asked me to point out that the sweeping majority of redditors didn’t do this, and many were incredibly supportive. Although the incredible power of the Internet is the amplification of voices, unfortunately sometimes those voices are hateful.

[2] We were planning to run a CEO search here and talked about how Steve (who we assumed was unavailable) was the benchmark candidate—he has exactly the combination of talent and vision we were looking for. To our delight, it turned out our hypothetical benchmark candidate is the one actually taking the job.

NOTE: I am going to let the reddit team answer questions here, and go do an AMA myself now.

If redditors wanted Pao out — and boy did they, with a viral change.org petition dedicated to just that cause — they've gotten what they screamed and cried for.

In the past month, and particularly the last week, the site's citizenry has been actively revolting, in part because a popular employee was let go from the company, and also in part due to the banning of such explicitly hate-fueled Reddit "communities" as "r/fatpeoplehate." Pao's apology on Monday seems to have done little good, and many a hateful, sexist Reddit post has been dedicated to her demise before and since.

Turning back the clock for a bit of perspective, here was the announcement made on Reddit when Pao was hired in 2013.

A long-time lurker, Ellen comes to us by way of a long, adventurous career spanning venture capital, business development, law, and electrical engineering. She's been a formal and informal advisor to reddit for more than a year, and recently decided to finally join us full-time. She'll be working on helping us build strategic partnerships that benefit the community. Here's Ellen in her own words:

"I grew up in Maplewood, New Jersey, raised by enginerds on Star Wars, computers and books. I live in San Francisco, via New York City, Boston and Hong Kong. I've worked with dozens of tech companies, traveling to eleven countries on five continents, to help build a variety of consumer and business platform companies. My favorite subreddits are /r/IAmA and /r/pareidolia (I like people even when they're not real). Being part of a community of people who care is inspiring and energizing. reddit has so much to offer so many people, and I'm excited to find partners to help make reddit even more awesome." 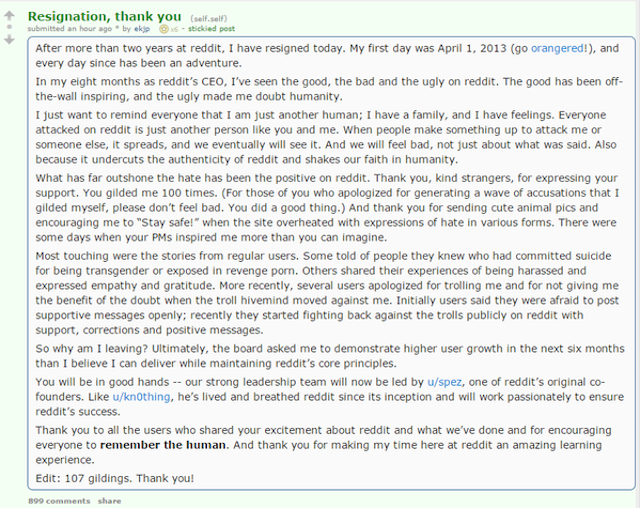 The former Dimond Bowl, a long-ago eight-lane bowling alley that hasn't been in use for bowling since the 1970s or 80s, is up for sale, and it's kind of an amazing space. For

The Twin Peaks panoramic lookout point is an iconic place to take visitors and out-of-towners, particularly for those of us way too snobby for Alcatraz or Fisherman’s Wharf. The views up there