This week's Apartment Sadness came in via the tip line a couple days ago, and subsequently blew up in the local media for reasons that should be obvious. Some opportunistic 22-year-old dude who lives near the Googleplex in Mountain View decided that someone might want to pay him 20 bucks a day to stay in a tent on his back patio. It's with some sadness that I inform you that even before the media picked up his Airbnb listing for the tent, he had gotten enough response that he more than doubled the nightly rate to $46, and offered it for $965 a month. (The listing is no longer live, possibly because it's fully booked for the next six months.)

Yes, the house, and tent, are not even walking distance to Google, but are walking distance to Caltrain. Landlord John Potter told CBS 5 (video below) said he saw an opportunity because rentals in the area average around $2000 a month. He's unapologetic about his bid at entrepreneurship, saying, "maybe they should build more affordable housing in Mountain View."

The amenities, in addition to a provided mattress (or air mattress) and pillow, include use of the bathroom in the house, with one shower allowed per day. Also, you are permitted to use the kitchen, and to eat indoors. 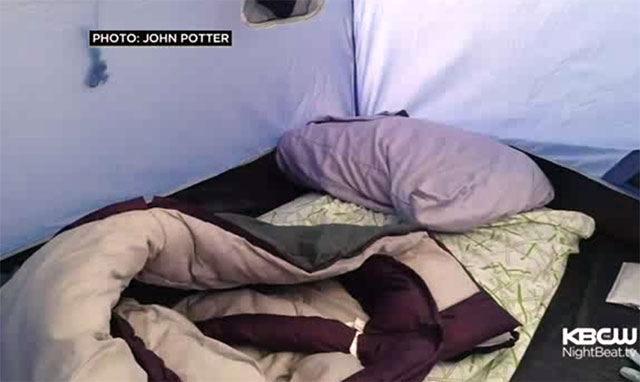 Though the photos suggest that it is a mostly concrete patio with the tent shoved up against the house and a few plantings around the edges, the Airbnb listing called it "a beautiful garden" and said it was in a "safe and friendly" neighborhood. 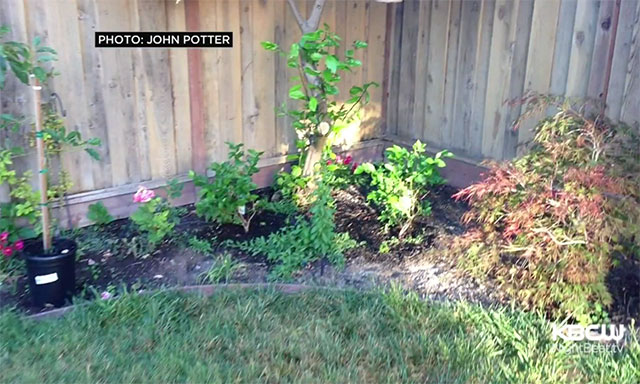 Oh, and did I mention there are dogs? Yes, close examination of that first photo reveals that there might be two canines taking a piss on or about your tent dwelling at different hours of the day, via that sliding glass door. "Must like dogs" should probably have been in that ad somewhere. 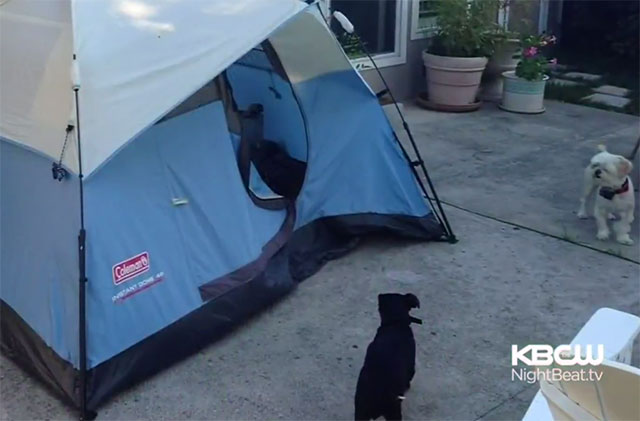 I did stop and wonder if the listing was real, but Potter's description seemed very sincere, and now we have on the record, unremorseful, in the flesh  which is a first for this column. And this of course calls to mind the stories we've all already heard about Google employees who are basically homeless, living out of cars or RVs in the campus parking lot. Potter said that interested tent renters have "mostly people in between jobs, or starting new ones."

Could it be true that there are that many new Google and LinkedIn employees who are either a) so underpaid that this sounds like a great option or b) so lazy, celibate, and shame-free that they would consider sleeping in tent in some 22-year-old dude's backyard just to shorten their commute?

Wouldn't they rather spend the extra hour to return to San Francisco so they could live with 60 other people in a tech dorm for $1500?

These options only exist because we accept them as our reality, people.

Ever wondered how those big Empire Strikes Back cranes work over at the Port of Oakland? Well, it's not often that civilians get to watch them up close, but here we have some

Good drinks tell a story, and this is the story of those drinks. Here, we'll be serving up a remedial cocktail lesson for bartending beginners to help you get the most out of

—
Apartment Sadness: A Tent Near Google For $965/Month
Share this