Good drinks tell a story, and this is the story of those drinks. Here, we'll be serving up a remedial cocktail lesson for bartending beginners to help you get the most out of your glass, with recipes, interviews, and histories coming right up.

"Pour one jigger absinthe into a Champagne glass. Add iced Champagne until it attains the proper opalescent milkiness. Drink three to five of these slowly."

These are seemingly Ernest Hemingway's instructions for how to die. Or at the least they're the recipe for a drink he ominously called Death in the Afternoon in keeping with the title of his nonfiction book on Spanish bullfighting.

Sometimes called the Hemingway or Hemingway Champagne, that "opalescent milkiness" he references is the result of emulsification and mostly disappears after the first sip. Writing for the New York Times, Harold McGee said that it "seemed a waste of effervescence."

Hemingway is counted among a coterie or writers and artists in Paris credited with popularizing absinthe, on its own or in cocktails, as a sort of creative wellspring. The drink is most simply a distilled, highly alcoholic (45-74% ABV) spirit often diluted with water before consumption. Not a liqueur because it's not traditionally bottled with sugar added, absinthe is derived from botanicals like Artemisia absinthium (or wormwood), green anise, sweet fennel, and other culinary and medicinal herbs.

Legend has it that absinthe was first a Swiss patent remedy, and probably an effective one, created by Dr. Pierre Ordinaire. In keeping with its medicinal history, by the 1840s absinthe was given to French troops to prevent malaria, and upon their return home, soldiers carried with them a taste for the stuff. When absinthe prices dropped precipitously (production picked up) all social classes could enjoy the drink, nicknamed "la fée verte" or "the green fairy" for the deity from whom you might expect a visit if you consumed enough of the spirit. If you weren't already dead in the afternoon, by the 1860s you could enjoy 5 p.m. as l'heure verte ("the green hour") at bars, bistros, cafés, and cabarets. 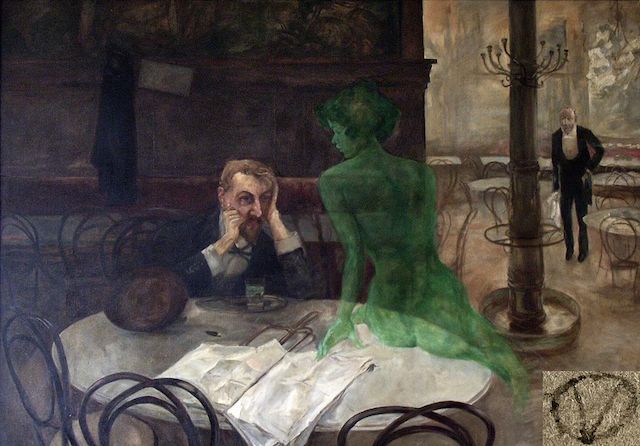 Henri de Toulouse-Lautrec and Vincent van Gogh, two artists who were arguably psychotic enough without observing l'heure verte, contributed giddily to the perception of absinthe as hallucinogenic. That hypothesis, though, is something no peer-reviewed study has ever confirmed. But with a reputation like that, perhaps it was inevitable that prohibitions on the stuff began in 1905. The dark times came after it was reported that a Swiss farmer, who was coincidentally a massive alcoholic, had murdered his family before attempting to kill himself after capping off a night of binge-drinking with a little absinthe he had handy.

"Absinthe makes you crazy and criminal," one social critic wrote, "provokes epilepsy and tuberculosis, and has killed thousands of French people. It makes a ferocious beast of man, a martyr of woman, and a degenerate of the infant, it disorganizes and ruins the family and menaces the future of the country." Several countries banned the spirit after the major swiss incident, with the United States outlawing it in 1912 and France in 1915. (Spirits historians have argued that good absinthe never made anyone crazy, but the cheaper stuff that people like van Gogh drank contained hard metals and other toxins that may, indeed, have negatively affected drinkers' mental and physical health.)

That ban would not be lifted in France until May 2011, and these days, drinks writer David Wondrich counsels that the best modern incarnations of absinthe are made by Ted Breaux of Jade Liqueurs. Lucid, a brand that's been legal in the US for some time, is also a good bet, as is St. George Spirits' version made in Alameda, California.

For those who can't wait until past noon for their visit from the green fairy, there's also the notorious Morning Glory Cocktail. This sort of "anti-fogmatic" or early "eye-opener" is prepared, as it has been since the 1880s, as follows:

Previously: Learning To Drink Vol. 19: The Coffee Cocktail Abides
All volumes of Learning to Drink.

This week's Apartment Sadness came in via the tip line a couple days ago, and subsequently blew up in the local media for reasons that should be obvious. Some opportunistic 22-year-old dude who

—
Learning To Drink Vol. 20: All About Absinthe
Share this