Dreams of more northerly BART routes, forever doomed when Marin County backed out of the regional system plan in the 1970s, not to mention more westerly underground routes to the avenues, are still just the stuff of myth and bar talk. But the notion of an ideal transit system for our fair city is alive and well with Elliott Spelman. Perhaps while dozing off on Muni, he's conceived of a dream map that includes several fictive new transit lines which would certainly make for a faster, probably denser city. 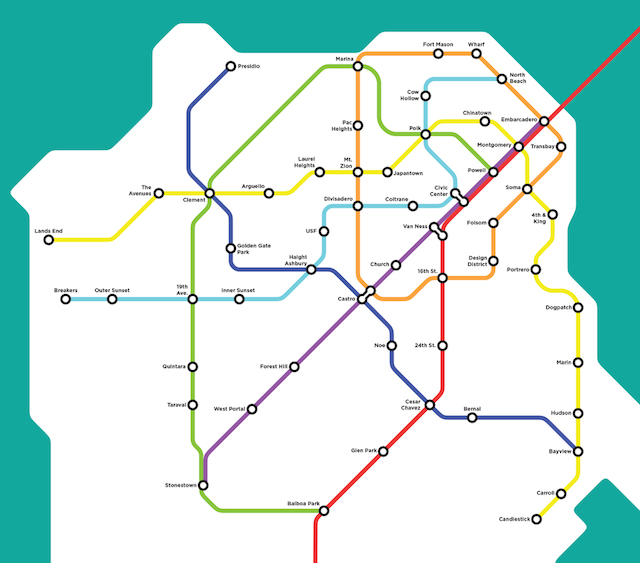 "To me, the difference between underground and above-ground trains is pretty staggering," Spelman tells Curbed, who picked up on the piece of fan art. "Underground is just faster, more predictable, and more efficient." Wait  how long has he been riding Muni?

"What neighborhoods are dense enough to support an underground station?" Spelman asked himself. "I strung those together in order to preserve general commute patterns, and also to support efficient transfers. Ideally, no trip should require more than one transfer."

It should be noted that he does away with the soon-to-be-reality Central Subway route, which connects 4th and King and Chinatown a bit more directly, in favor of two routes, one of which forms a complete circle through SoMa, the Embarcadero, Fisherman's Wharf, and Divisadero. 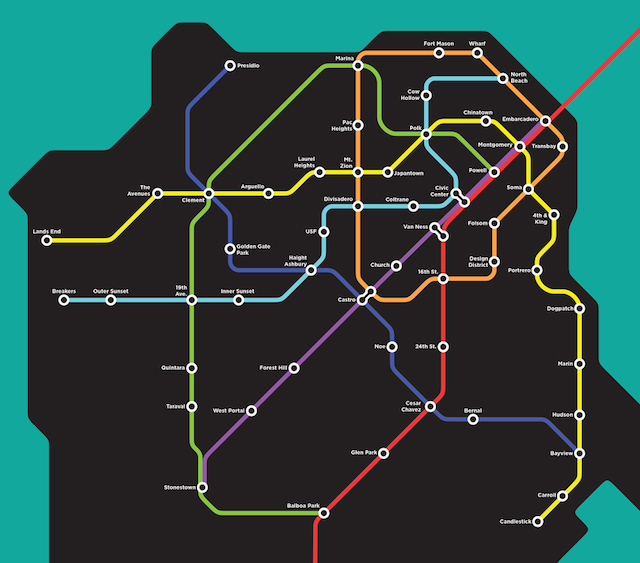 Spelman's map is highly hypothetical, but I for one am more than happy to suspend by disbelief and argue about it anyway. For an alternative, see The Bold Italic's imaginative attempt from last year.

The legal battles over Scott Wiener's 2012 nudity ban linger on, and today SFist received an update from one of the lead nudity activists/"body freedom protesters" and all around fun character Gypsy

Once again, we're not jinxing anything, and tonight may or may not be the triumphant clincher for the Warriors' historic, at times mind-blowing, 2014-15 season. If it is, you can expect, probably, a