It turned out to be a lie when we were promised outdoor movies at Hayes Valley's semi-permanent PROXY complex last fall, and it looks as though the concept for the space has morphed a bit since then. Where there was once a combination fitness center and movie screening area with a smallish screen, plans have expanded to make this a dedicated outdoor "walk-in" movie theater with both a wind screen on one side, and wider screen to show independent films at the proper aspect ratio.

There's now a new Kickstarter looking to raise at least $150,000, with stretch goals going up to $250,000, to get the necessary projector, build the new container-based "walls" of the amphitheater, and potentially build a box office as well. Envelope A+D, which designed the rest of PROXY, has new renderings that you can see above and below. 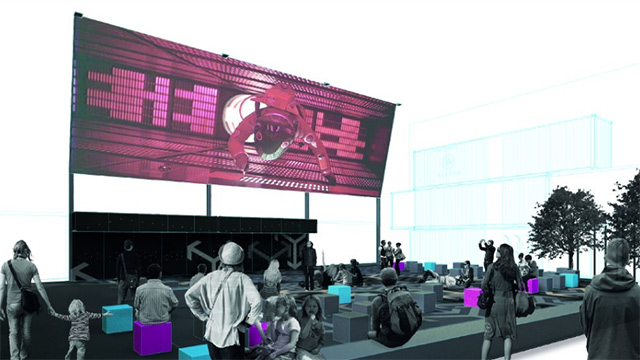 As Hoodline reports, the existing screen structure was put to use for the first time last night as part of an SFJAZZ festival kickoff party at PROXY, that's doubled as a kind of block party for the neighborhood. The screen was used to screen a vintage jazz film.

And there's already a PROXY Film Festival planned for the fall, regardless of the outcome of the Kickstarter, where they promise to screen "recently released, best-of-show selections from festivals like SXSW and Sundance, focusing on independent and emerging voices in film," all for free. 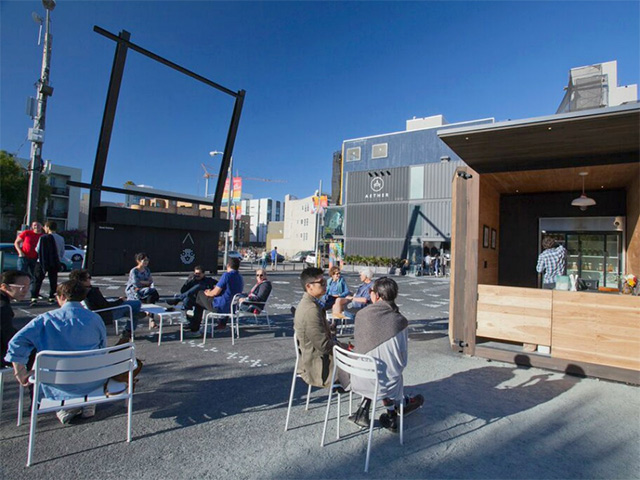 The screening area as it looks now. Photo via PROXY/Kickstarter

PROXY, meanwhile, got a new "lease" of sorts from the city, allowing this whole temporary complex to live on until at least 2020, which is part of what's driving the desire to activate this last square of empty space along Octavia Street. PROXY was originally conceived in 2007 to live for just three years on city-owned parcels of land that are earmarked for affordable housing development. Because the economics of that development were not good at the time, the city decided to lend the space to be used for things like Biergarten and the Ritual Coffee and Smitten Ice Cream stands that have been there ever since. While some development is already occurring up the street, PROXY is getting to stay for at least five more years.

Below, the Kickstarter promo video.

All-organic breakfast and lunch spot Heyday, which opened its original location at 180 Spear Street in 2013, is set to branch out with a new, second location at 555 Mission Street (between First

Chefs and co-owners Margie Conard and Dana Tommasino of the shuttered Woodward's Garden will be replanting their business as Gardenias in Lower Pacific Heights, Tablehopper informs us. Fans of the 1992 established white-tablecloth