Carve out another plot in the startup cemetery. Secret, an app that's been around for just a year and was used for anonymous gossip from the minor to the disgusting to, occasionally, the slightly interesting, has announced that it will shut down operations.

With a heavy heart, I've decided to shut down Secret, wind-down the company, and return the remaining money. https://t.co/HZUCMe3xFu

"What an incredible journey," writes CEO and co-founder David Byttow in the dramatically titled Medium post linked to above. "I believe in honest, open communication and creative expression, and anonymity is a great device to achieve it. But it’s also the ultimate double-edged sword, which must be wielded with great respect and care. I look forward to seeing what others in this space do over time." Indeed, Sarah Lacy pointed out some of the percieved dangers of Secret in a fairly typical Pando blog attack here.

But at least Byattow got a Ferrari out of it all. As Business Insider reported in March, "during the series B round, Byttow and Bader-Wechseler [his cofounder] exchanged some of their stock for $3 million each. Byttow then promptly purchased a Ferrari, a toy he's wanted for a long time, sources say."

Though Techcrunch notes that the company somehow raised $35 million, it will be returning some of whatever's left. The app seems to have not caught on outside of its initial Silicon Valley incubation, where hot acquisition and trade secrets flourished. An actual "exciting" one was "Flurry is getting acquired by Yahoo. Not sure for how much," and a heavy redesign seems to have been a poor choice. For the most part, secrets included requests for sex and violent, offensive statements.

So, farewell, Secret! We hardly knew ye. Or we sort of already did, because you were a copy of Whisper, and then a copy of Yik Yak. 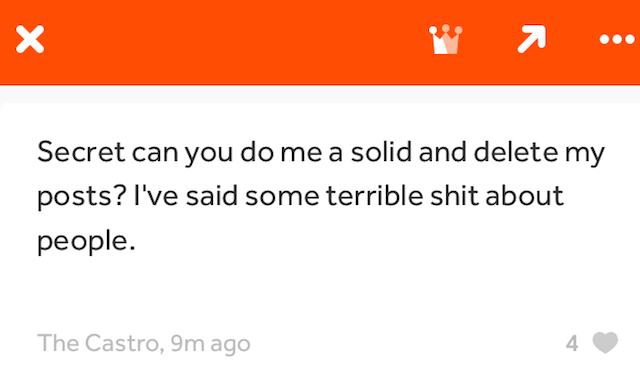 "Zoo director Tanya Peterson revealed that Robin Williams’ pet parrot, Mischa, will live at the zoo," writes Leah Garchik in an aside for the Chronicle, piquing curiosity about the late actor's feathery friend.

As predicted a year and a half ago, Uber has much bigger plans than being just "everyone's private driver." As Tech Crunch is reporting via some leaked training docs, Uber's in the process

—
Secret's Out: Anonymous Gossip App To Shut Down, Founder Got A Ferrari At Least
Share this