I think we can all agree by now that despite a premise that is supposed to revolve around three gay male characters, many of Looking's finest moments involve Doris (Lauren Weedman), and she is easily the funniest character on the show. So last night's episode may just be my favorite out of both seasons because it centers on Doris and a trip to Modesto to her father's funeral. And, perhaps because this was all about Doris, the writers seemed to be able to take some fresh and unexpected turns with the plot of the episode as well.

The curtain rises on the morning after Halloween, with everybody at brunch rehashing Patrick's epic party meltdown that made us all really uncomfortable and sad for him last week. Augustin jokes, "I'm really looking forward to the drag queen reenactment of your epic speech at the Castro [Theater]." Dom says, "You were a fucking mess, girl," in perhaps the first instance of Dom using the word "girl."

Doris is getting texts from Malik, and she says that she's had "17 orgasms in the past five days," (Dom adds, "I've had the pleasure of hearing about 15 of them."). And then she gets a text from her Aunt Sarah saying her dad is dead, and the next beat is perfectly written, with Doris looking serious, and confused, and then saying, "That's not my coffee. I never got my coffee."

We then cut to the road trip that will encompass the rest of the episode where, conveniently, Patrick has decided to tag along  at first we just see Dom and Doris in the front seat of Dom's Volvo wagon heading east toward Modesto, but then up pops Patrick from the backseat, all excited to see the Frito-Lay factory because he is really obsessed with food.

Patrick starts asking Doris about her dad, and her childhood, and we learn that Doris's mom (now dead) was a raging alcoholic. "She used to come into my room in the middle of the night, drunk, and she would say, 'And, where were you?' and I'd say, 'Out driving with Dad,' and she'd go '[fart sound] Up yours with a meat hook.'" And, Dolores adds, that this messed up childhood "gave me a sense of humor, and encouraged me to go into nursing."

They go straight to the funeral home so she can see her dad, and she almost breaks into tears, but not quite, proving again that Lauren Weedman is an excellent actress.

Dom takes everybody to a restaurant that used to belong to his dad that's now a doughnut shop, and of course the ends with Patrick ordering a half dozen apple fritters before they all go swimming in the hotel pool  a Clarion whose 1980s pool Doris said she used to think was "so rock star." Then they all enjoy some poolside KFC, which was obviously Patrick's idea. And did I mention Dom and Doris talk about all the sex they had in high school? Yeah, that happened.

Doris and Dom then take Patrick to a sad Modesto gay bar where they just got a new blender for making strawberry daiquiris, and they have a drag queen named Kitty Leukemia. The gang sticks to Bud Light and then dances to "Walking on Sunshine."

Then it's time for the funeral, with a nice eulogy by Aunt Sarah (played by the inimitable and wonderful Mary Kay Place), which pushes only Patrick over the edge to bawling out loud when she starts reading a Walt Whitman poem. At the reception, there's a video slideshow with a recreated high school photo of Dom and Doris that I need to screencap right here. 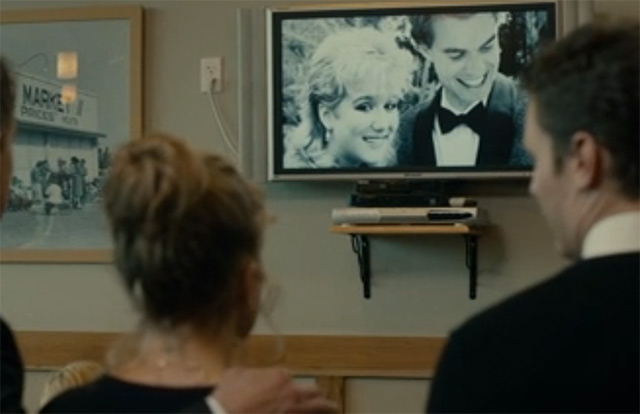 Doris immediately decides she needs to pound some scotch. Then Dom has to come out to somebody he went to high school with who asks if he and Doris ever got married. After this, they head back to the cemetery because Dom wants to find his dad's grave. But he can't, and he laments how he never got to come out to him. Doris says, "I'm sure he would have been fine with it," but then Patrick has the idea to have Dom just scream out the window of the car as they pass all the graves, "I'm gay!" This leads to Patrick going perhaps a bit fast and not paying attention to the road through the cemetery, because they then get violently sideswiped by a huge black SUV.

Thankfully everybody's OK, but it's a shocking, off-kilter moment for this usually quiet show. At the hospital, as they wait for Patrick to get stitched up (he emerges with his arm in a sling), Doris tells Dom that her dad left her a little money, and it's enough for his chicken window, and she wants him to have it. So, bring on the peri-peri chicken once more in the longest-running chicken-related storyline currently not on the Food Network.

And if this episode couldn't be more chock-full of plot, guess who's waiting for Patrick when he arrives back at his house! Kevin. He says he's been trying to call and Patrick hasn't answered, and he says, "I've left John." He tells Patrick he's "completely in love" with him, and asks him if he wants to give it a go, "Just you and me." Patrick says "yes," without hesitation.

All previous Looking recaps on SFist.

As frequently noted, San Francisco plays host to many single men, as it's likely done since the Gold Rush. Recently, you may recall the dating startup offering to fly women from NYC to

A new report by some Stanford climatologists paints a dismal picture for California's future, suggesting that our current drought is absolutely tied to human-caused climate warming, and that the frequency of these droughts

—
<i>Looking</i> Recap: It's Finally All About Doris
Share this