James Shyabout of Oakland's Commis, The Dock at Linden Street, and Thai street-food-inspired Hawker Fare has quietly opened the doors to his new branch of Hawker Fare at 680 Valencia Street, in the massive, two-level space formerly occupied by Amber Dhara.

The opening was earlier announced just as "early 2015"  and SFist included it in our roundup of the most exciting openings in the new year  but since delays for these kinds of projects are usually the rule, no one was expecting the place to get open quite this fast. But, as of Saturday, the place was softly open serving a full menu.

There's been only a light remodel, and inside the space you'll find colorful table clothes and stools at small and communal tables. There's also some lounge-style seating on couches near the entrance, but the spacious upstairs mezzanine isn't open quite yet.

See the menu below, which is inspired both by Asian street food and by the Isan region, near Thailand's Laotian border  and which is longer than at the Oakland restuarant. Though Shyabout grew up in Oakland, his family comes from this area of Northern Thailand, and he was inspired to open the first Hawker Fare after growing up around his mother's food  for many years she ran a traditional Thai restaurant in the same Oakland space, Manyda Thai, and taking over the space, he said at the time, was "the only way I could get her to retire."

Now Syhabout tells SFist that he was able add some more stews, soups, and salads to the Valencia Street menu, and they'll be open late on weekends  until 11:30. Reservations are available starting today. The new chef de cuisine is Bangkok-born Supasit “O” Puttkaew who's getting some help from Oakland location chef Manuel Bonilla. 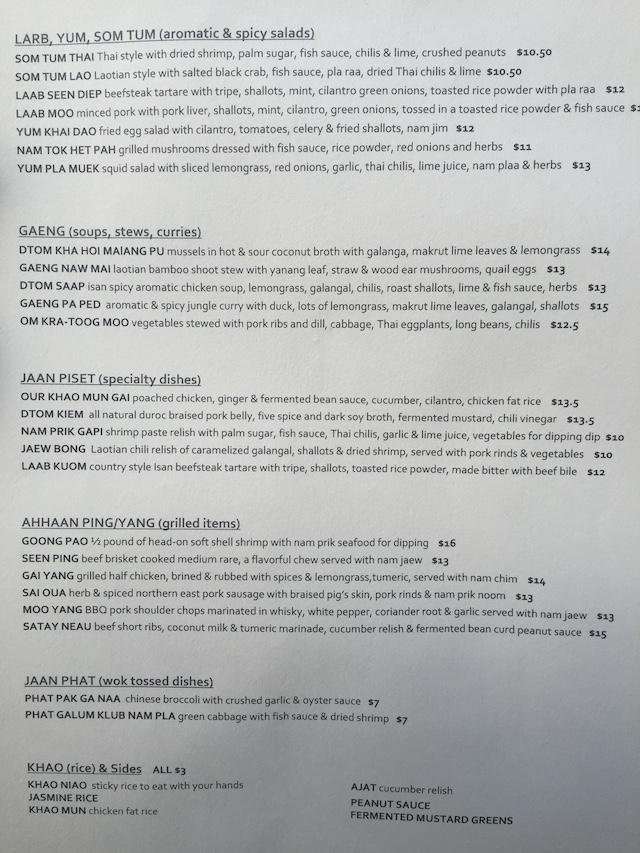 The upstairs bar, a semi-separate concept called Holy Mountain  named for this cult film from 1973  will be open in two weeks, according to Syhabout, on February 6. "Wishful thinking," he says. Kind of like Trick Dog, Holy Mountain will have changing formats, the first of which will be a Mardi Gras theme drawing inspiration from New Orleans, Haiti, Trinidad and Brazil. The bar guys for both the upstairs and downstairs bars are Christ Aivaliotis and Troy Bayless, formerly of Oakland's Flora, who are also working on the bar program for Mourad downtown.

The downstairs bar opens at 5 p.m. every night.

A "potentially historic storm" that "could unload 1 to 3 feet of snow" is all our East Coast friends are capable of discussing, but, really, how is this my problem, you are perhaps

Are you wondering who on earth would buy an SF taxi medallion? Well, now you know. [SF Chronicle] I thought this article entitled "Here’s the Secret Silk Road Journal From the Laptop