A suspicion-confirming report from Paragon Real Estate Group points to three neighborhoods that have seen the greatest bump in home values since the financial crisis: Bayview, the Inner Mission, and Bernal Heights (in that order). But even if you didn't buy in one of those neighborhoods, you still have seen crazy appreciation in your home in the last three years, probably upwards of 40 percent.

The findings, written about here in the Chronicle, are based on a review of median sales price and average dollar-per-square-foot data for San Francisco homes in neighborhoods where there was enough sales data to compare.

The report doesn't include all of the 80-plus neighborhoods listed on the San Francisco Association of Realtors’ map, but it's nonetheless thorough. Here's the chart in question, which shows appreciation since the 2010-11 market bottom through today, with appreciation since the pre-crash peak of 2006-8 in a sidebar in red. 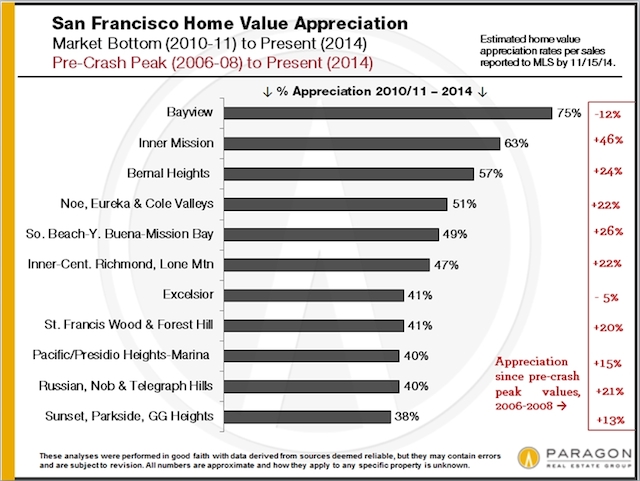 From the text of the report:

Over the past 3 years, in our latest market recovery, San Francisco neighborhoods have typically appreciated 40 - 50%, with an overall increase of approximately 44%. This correlates well with the Case-Shiller Index for the Metro Area, which estimates appreciation in the range of 42% - 46% for Bay Area mid and high-priced homes. As one can see in the percentages in red, most of the city’s neighborhoods have now exceeded, often by substantial margins, their previous peak values before the bubble popped. However, some of the neighborhoods hit hardest by the subprime crisis are still below their previous peaks.

Now for analysis of the top three appreciators, starting with Bayview, which is up 75% from 2010-11 but still down 12 percent from its 2006 market peak: "During the downturn, its housing market became dominated by distressed sales and it fell so far that now, with the disappearance of the subprime effect, its recovery has been equally dramatic. But because its bubble was so large, it is still below its 2006 peak value."

Second in line is the Mission, where the report is hip to demographic changes in this neighborhood. It appreciated 63% from 2010-11 and 46% from its 2007 pre-crash peak, and changes can be chalked up to a huge "change in buyer demographics over recent years: Though it had been slowly gentrifying since the nineties, more recently [the Mission] became a highly sought-after home location for young, hip, affluent, high-tech buyers. They love the Valencia Street corridor, being close to Dolores Park, the sunny weather and the [disappearing] edginess."

You can also wave goodbye to your dream home in Bernal, says the report. The neighborhood is up 57% since market bottom and 24% from a previous 2007 market peak: "Bernal Heights has become one of the most popular, more affordable, go-to neighborhoods for house buyers who like the neighborhood ambiance of the general Noe Valley area, but were priced out there by its rocketing prices." 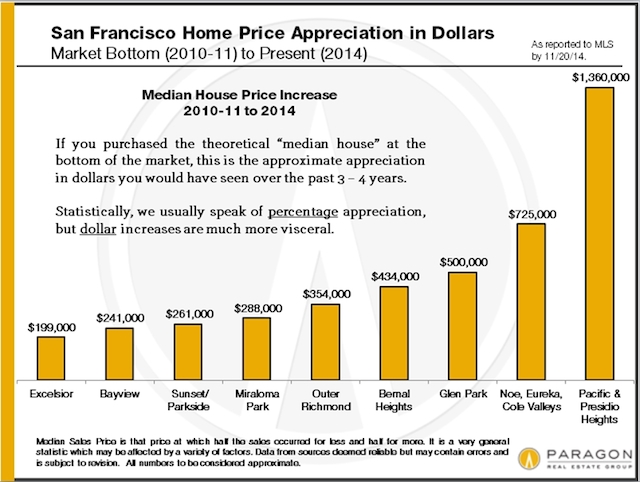 Click to enlarge It's no longer true that if you get priced out of San Francisco you can just move east  as we learned last week, rents in Oakland are actually shooting up

SF's water taxi company keeps on growing. [NBC Bay Area] If you go to a movie at the Metreon on Friday, you just might see the new Star Wars trailer. All 88 seconds

—
Report: Which Neighborhood Home Values Appreciated The Most?
Share this