As you can imagine, we've gotten a number of press releases today that could be interpreted as attempts to capitalize on the tragic death of Robin Williams. However, one we received this afternoon stopped us in our tracks: the news that Koko the world-famous signing gorilla was in mourning over the beloved Bay Area actor and comedian.

The Woodside, California-based Gorilla Foundation was formed in 1976 in part to to care for Koko, a gorilla born at the San Francisco Zoo in 1971 who became famous for her fluency in sign language and for her amazing relationship with a kitten. The foundation introduced Williams to their most famous resident in 2001, a meeting you can watch in the video below.

At that meeting, Gorilla Foundation staffers say, Williams made Koko smile for the first time in six months, ever since her childhood gorilla companion, Michael, had passed away at the age of 27.

"Not only did Williams cheer up Koko," a Foundation spokesperson said this afternoon, "but Williams similarly seemed transformed — from a high-energy entertainer, into a mellow, sensitive, empathetic guy, who also happened to be really funny."

According to a Foundation spokesperson, when the calls regarding Williams' death began to come into the facility, Koko approached Foundation co-founder Dr. Penny Patterson "with an inquiring look on her face."

Dr. Patterson told Koko that "we have lost a dear friend, Robin Williams," a spokesperson said. Later in the day, after hearing another person break down in tears, Koko signed "CRY LIP," withdrew, and "became very somber, with her head bowed and her lip quivering," as seen in the photo below. 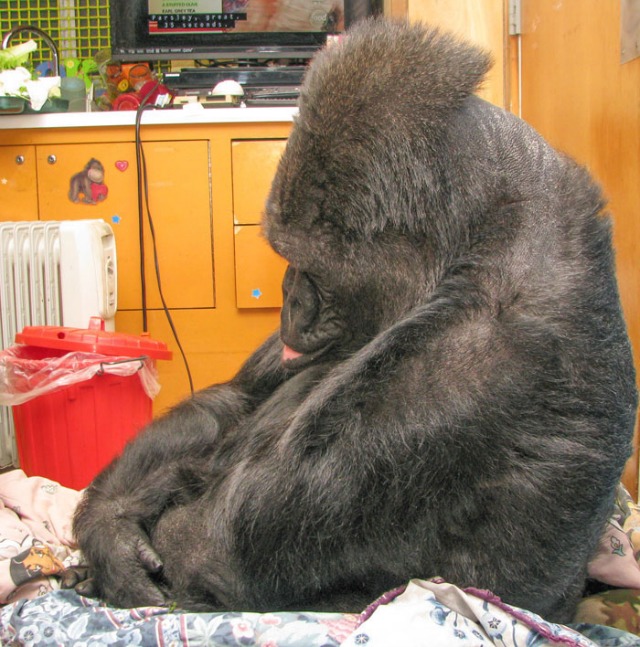 “Koko and Robin’s encounter is a supreme example of how humans and gorillas can overcome interspecies boundaries and express the highest form of empathy — embracing differences,” Dr. Patterson said in a statement.

“Robin’s ability to just ‘hang out’ with Koko, a gorilla, and in minutes become one of her closest friends, was extraordinary and unforgettable for Koko. We hope that when you remember Robin Williams, you’ll remember that he is not only one of the world’s most beloved entertainers but also one of the world’s most powerful ambassadors for great ape conservation.”

In this photo from August 12, 2014, Koko mourns the death of Robin Williams. (Photo: The Gorilla Foundation)

Officer Chris Kohrs, a.k.a. The Hot Cop of Castro, is participating in a contest for charity next Monday that will involve him wearing something skimpy and having buckets of ice thrown

Assistant Principal by day, rapper by night, Joe Truss might be the coolest adult in the entire San Francisco Unified School District. Watch in the above video as Truss raps with his former