A wildfire that broke out around noon yesterday in Pope Valley and Butts Canyon, northwest of Lake Berryessa in northern Napa County, has grown quickly in the 21 hours since, burning a reported 3200 acres so far.

The fire is currently only 30 percent contained, and has forced the evacuation of at least 200 homes so far, as ABC 7 reports, including 180 in a subdivision called Berryessa Estates. About 1,000 firefighters are now battling the blaze, including those from Napa, St. Helena and the Lake County and Napa County fire departments, and about 280 structures are under threat.

Many throughout the region have been looking at a huge plume of smoke for the past day, and one that looks kind of like a distant volcano erupting, as at least one person told CBS.

The fire was first reported on the 7800 block of Butts Canyon Road at 12:08 p.m. Tuesday, and the cause remains under investigation. It spread quickly through the dry brush and trees in the canyon and had burned 800 acres within the first four hours. Since that time it has quadrupled in size, but firefighters set up containment lines throughout the night and CalFire reported that the fire was 30 percent contained as of 5:30 a.m.

CBS 5 has multiple pictures from the area yesterday, and some video below of the blaze as it looked this a.m.

Also below, a map of where the fire is currently burning. 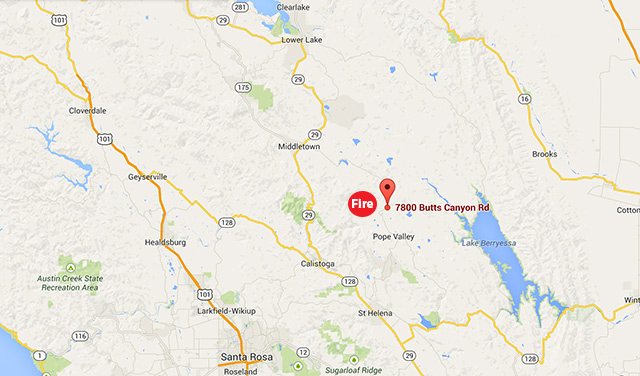 Burger King scored a potentially viral advertising hit  at least among left-wing beef eaters  with this new video about the "Proud Whopper," which was launched as a limited promotion at a single location

The new publisher for the company that owns the [SF Examiner], the SF Bay Guardian, and SF Weekly looks an awful lot like "celebrity chef" Michael Symon. Am I wrong? An op-ed in