Friday: IndieFest Roller Disco
From 8 PM on Friday night, lace up your skates and get rolling at SF IndieFest's Roller Disco party at the Women's Building (3543 18th St at Valencia). You can bring your own wheels, or rent skates from Black Rock Roller Disco. Costumes are encouraged (the more disco the better) and there's a full bar. Admission is $10, with all proceeds going toward SF IndieFest. You can buy tickets here. 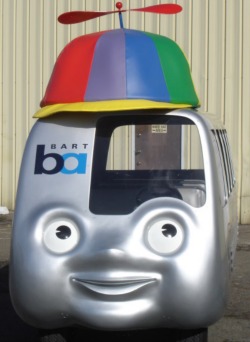 Saturday: Party with the BARTmobile
No, it's not the Batmobile, and it's not Bratmobile, but if you got that last reference you're probably old enough to have kids who would love love love to celebrate with the BARTmobile, which is turning 10 years old on Saturday. Join the most adorable member of BART's fleet at Children's Fairyland in Oakland from 11AM-1PM Saturday. You can even take BART there, as the park is just a short walk from the transit agency's 19th Street Station. Event organizers promise a raffle for fun giveaways and complimentary mini cupcakes. Fairyland admission is $8, but if you mention BART you'll get a buck off each ticket.

If you're not wiped out from your day at Fairyland, then Saturday night you can celebrate the SF LGBT Center's 12th Anniversary! Themed as "a Jazz Tribute to San Francisco’s Beat Generation," this is their marquee fundraiser of the year, with tickets ranging from $95-$150. There's a silent auction and performances from local acts including DJ Robot Hustle, Moisat, Trixxie Carr, DJ Rapid Fire, Fauxnique, DJ Pink Lightning, Miss Rahni and DJ Taco Tuesday. The event runs from 6:30 to midnight, at the City View at the Metreon.

Sunday: Crossroads 2014 Film Fest
Sunday's the final day of the Crossroads 2014 Film Festival at the Yerba Buena Center for the Arts, Kadist Art Foundation and the Victoria Theatre. Sunday you can take in Program 8 (3 PM) intimate immensities 2: untethered, Program 9 (5 PM), choreographies of devotion, in the roaring traffic’s boom, and Program 10 (7 PM), phantom tunneling 2—life is long, the walls come off, and light enters your cell(s). All of Sunday's programs are at the Victoria (2961 Sixteenth Street at Mission), check the event site to buy tickets (they're $10 per program) and for details on other programs and days.

According to Mountain View police, students as young as 13 years old have been spotted using and dealing drugs at Mountain View High School in Silicon Valley. After one student overdosed last month

Let me tell you the story of Pie Fridays. It was one of those ever so precious San Francisco food phenomena that sprung up near the corner of 19th and Linda Streets in