This will change everything, folks. A couple of Swedish women invented an amazing new bike helmet to address the issue of ugly, uncomfortable plastic things that are total fashion don'ts.

A professor who served as advisor has already told them, "You're going to be millionaires," and they very well might.

The concept seems pretty complex, but allegedly it works. It functions like an airbag in that it's a collapsable, inflatable thing, worn like a cowl neck or scarf, and it pops up over your cranium in the event of an accident  it looks like its triggered by impact and sudden flipping over the handlebars. 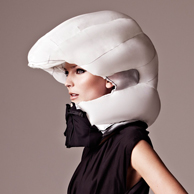 Basically it's totally awesome and everyone will want one. Jalopnik picked up the story this week (TechCrunch had it back in August), and the inventors, Anna Haupt and Terese Alstin, came up with the design while studying Industrial Design at the University of Lund. Production of the helmet was a collaborationairbag manufacturer Alva Sweden. They reenacted thousands of bicycle accidents during the seven-year testing and design period, and the thing apparently works.

It's called the Hövding helmet, and so far it looks like it's only available from Swedish, Danish, and other European retailers. But retailers in the US can contact the company at that link.

Now you can go out on the town in your hippest garments and ride your Public Bicycle through the Mission whilst looking cool and without fucking up your hair. Huzzah!

Time Magazine, the same one that named you Person of the Year in 2006, has a new empowering interactive tool that shows you exactly how much Twitter owes you based on the value

Bad news for fans of Lers Ros's one-year-old Hayes Valley branch: It's been closed down by order of the health department because of a major roach infestation. A friend of SFist alerted us