Bad news for fans of Lers Ros's one-year-old Hayes Valley branch: It's been closed down by order of the health department because of a major roach infestation.

A friend of SFist alerted us to the situation after they themselves reported the restaurant. He had sat down to dinner with a friend, and was served an unwelcome surprise. "I was served a soup terrine that had four cockroaches crawling on it. (We walked out, of course.)"

The Health Department acted quickly after it subsequently found a roach infestation in the place.

The restaurant's health license was suspended yesterday pending roach abatement, and we'll let you know when they're allowed to reopen. But don't try to go for pad see ew this weekend.

[Update: As Inside Scoop reports, the restaurant is reopening Saturday, November 9, and they've gotten a clean bill of health from the health inspector.]

But this should be a lesson! If you see something totally gross and disgusting, report it!

Here's the posting on the restaurant's window. 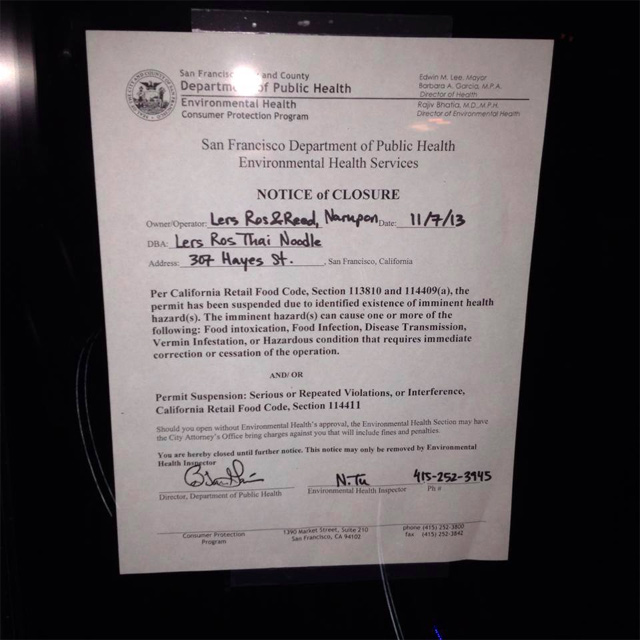 This will change everything, folks. A couple of Swedish women invented an amazing new bike helmet to address the issue of ugly, uncomfortable plastic things that are total fashion don'ts. A professor who

After a successful season of monthly marketplace events, Batch Made Market will throw one last locally sourced hurrah for 2013 this Sunday afternoon with park games, beer, plenty of food and workshops — including