Former Dallas chef Casey Thompson, who relocated to the Bay Area in 2008 shortly after her Top Chef Season 3 appearance, is finally opening her own spot here. As the Chron is reporting, Thompson has signed a deal to take over the space in the Warwick Hotel, on Geary near Union Square. The space is currently occupied by La Scene restaurant, which we didn't even know was there, and which will close in two weeks.

Thompson previously worked under famed Texas chef Dean Fearing before becoming executive chef at Shinsei in Dallas. She then moved to the Bay Area and has spent the last few years working at wineries and as a private chef in Napa. Two years ago she hinted that she was trying to open a spot in Napa, but that plan obviously fell through, and she's apparently been talks with the Warwick for a year. 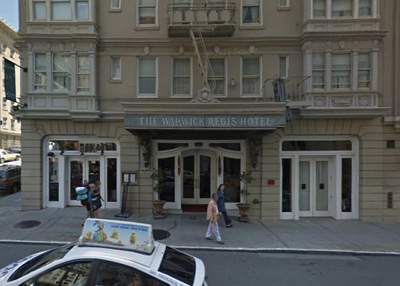 Thompson's new spot will be called Aveline, and will be "a 60-seat modern California restaurant that takes its name from Thompson's grandmothers." (One of her grandmothers was named Hazel, and the other was French, and “aveline” is French for hazel.) Next to it will be a cocktail bar headed up by Beretta alum Adam Wilson called The European. The concept is "refined casual fare," and they're aiming for a spring opening after a full redesign. See a handsome rendering here.

This news comes quickly on the heels of the news that Top Chef Masters contestant Suvir Saran is also coming to town to open a spot on mid-Market, and we're just a month into the re-opening of Tosca Cafe at the hands of New York restaurant heavyweights April Bloomfield and Ken Friedman. So, yes, San Francisco is awesome and the new nexus of the American food scene and everyone knows it.

Did you know that Instagram is being widely used as an open-air drug market? It is. Vice just covered the story of the vast Instagram trade of lean a.k.a sizzurp a.

Noted city correspondent Phil Matier sounds grumpy today, and he's using the occasion of Twitter's much ballyhoo'd IPO to talk about the tech bust many of us believe may be around the corner.