Larry Ellison got what he wanted, ladies and gentlemen, and Oracle Team USA retained the America's Cup with a wide lead in today's final, deciding race. We think this might mean that we could be seeing the Cup happen in San Francisco again.

Team New Zealand started today's race with a small, 50-meter lead, and quickly lost it to Oracle Team USA by the third gate, all due to the Americans' superior boat speed and the tactics of captain Sir Ben Ainslie (who is, in fact, British, has sailed for New Zealand before, and has won four Olympic gold medals).

The Americans won the 34th America's Cup with a lead of 44 seconds by the final leg. Emirates Team New Zealand ended up anywhere from 10 to 15 knots behind Oracle Team USA throughout the latter half of the race, and it had the commentators at NBC Sports scratching their heads over it all, wondering how the Kiwis went from being so consistently fast in the first week of racing to being so consistently trounced. The answer seems to be that, given the learning curve for both crews with this new sailing technology, Oracle simply learned faster and ended up capable of faster sailing by the latter half of the competition, often achieving upwind speeds that left the Kiwis in the dust.

New Zealand captain Dean Barker did an admirable job, but the pride of the sailing-loving nation of New Zealand was crushed today after giving up a 8-to-1 lead last week.

This event, which many of us poo-pooed as a bajillionaire's vanity project involving an elite sport nobody cared about, ultimately did deliver in the drama and spectacle department. Even we at SFist have to admit we ended up riveted, and these 13-story, multi-million-dollar catamarans sure are rad looking out there.

And as the NBC guys put it, regarding the pre-Cup press, "People said the boats were too big, too expensive, it wouldn't be exciting... au contraire!"

Also, they added, during today's race, "We are witnessing a new sport."

Larry climbed aboard the Oracle boat he bought after his team snagged this astounding win and was showered with some champagne. Touché, Larry. Touché. 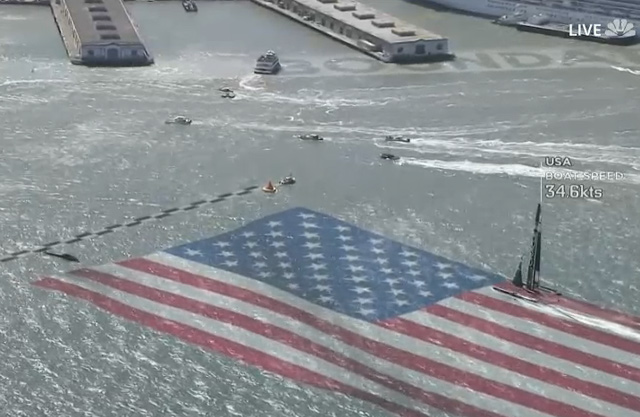 The best-kept secret in San Francisco is the hotel bar. It rocks. It's chic. It can lead to the perfect one-night stand. When you want a new crowd, a fresh scene, or a

A disgruntled anti-Googler has put up this large-scale poster, poetically decrying the search engine's inexorable reach into our lives. It reads: I'm watching you/ I'm targeting you. I'm searching for you. I'm tracking