The best-kept secret in San Francisco is the hotel bar. It rocks. It's chic. It can lead to the perfect one-night stand. When you want a new crowd, a fresh scene, or a more chic setting that goes above and beyond the hipster-laced "dives" of the Mission or the bro settings of the Marina, a hotel bar is the best bet. Here are our top 7 in San Francisco.

Clock Bar
Second only to OneUp in the ranking of Union Square hotel bars, if only because of the space itself, is the Clock Bar off the lobby of the Westin St. Francis. We love the cozy elegance of it, and the drink list is consistently interesting and changes with the seasons -- note that it's owned and operated by the Michael Mina Group. The only drawback is this place is small and is often uncomfortably packed, depending on when you arrive. And stuff ain't cheap. Still, this is a good place to bring a cocktail connoisseur if you happen to be in the neighborhood. 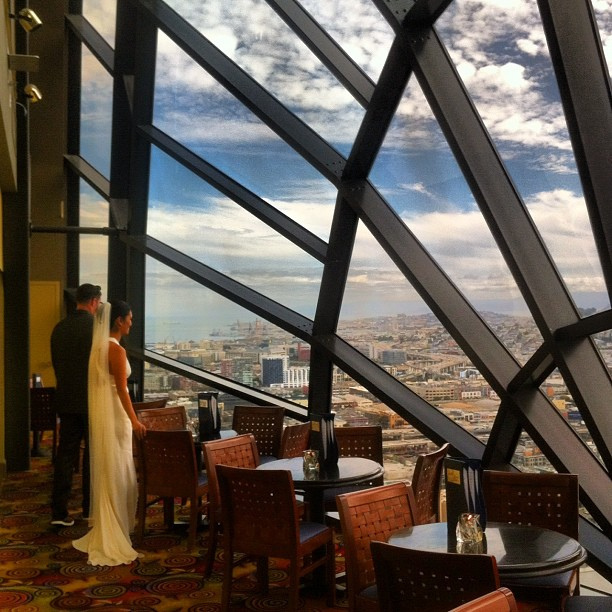 The View at the Marriott
On the 39th floor of what Herb Caen famously dubbed "the jukebox," The View offers exactly that and little else: massive windows framing views from bridge to bridge and plentiful square footage to stretch out and enjoy it all. The decor, like the clientele, may not be the hippest in town, but that only makes the place feel like a more exotic destination. (Pro-Tip: Avoid the place during conference season and find one of the order-at-the-bar tables to take in the view in solitude.)
The View in the Marriott Marquis. 780 Mission (at Fourth Street) 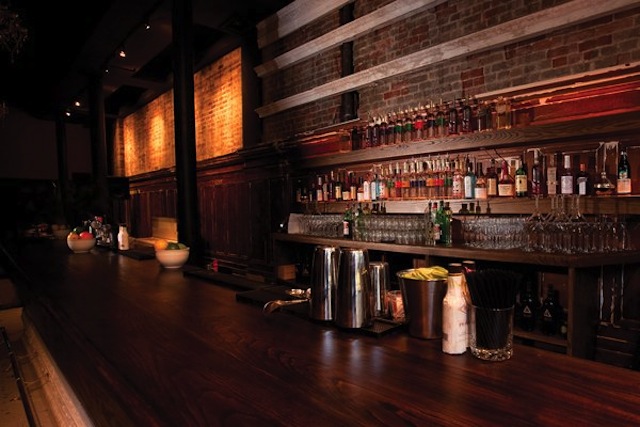 The Burritt Room
Tucked in the second floor of Charlie Palmer's boutiquey Mystic Hotel, the Burritt Room offers expertly made cocktails in an authentically noir setting. (The alley behind the hotel is a crucial setting in The Maltese Falcon.) The prohibition-era theme would feel played out if the room weren't showing so many signs of actual age. The perfect place to meet someone tall, dark and handsome.
417 Stockton (at Sutter) 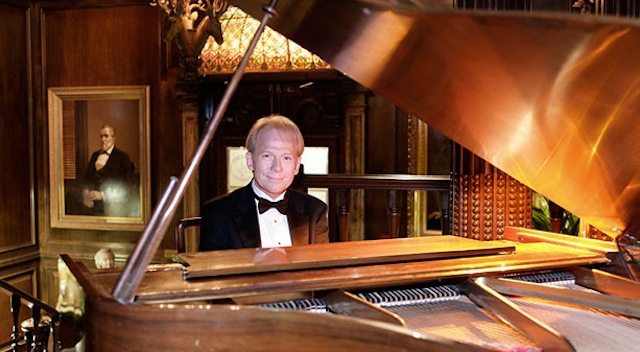 Big 4
The most clandestine and under-the-radar hotel bar in town is this one, inside the Huntington Hotel atop Nob Hill. The scene is generally mellow, maybe a bit elderly, with a piano player often lightly tickling the ivories and a weathered, hotel-union bartender mixing up perfectly acceptable Manhattans with bright red Maraschino cherries in them. You can order food here, or at least a snack, and it's the perfect place to meet an old friend, have a serious talk, or conduct a secret affair.
1075 California (at Taylor) 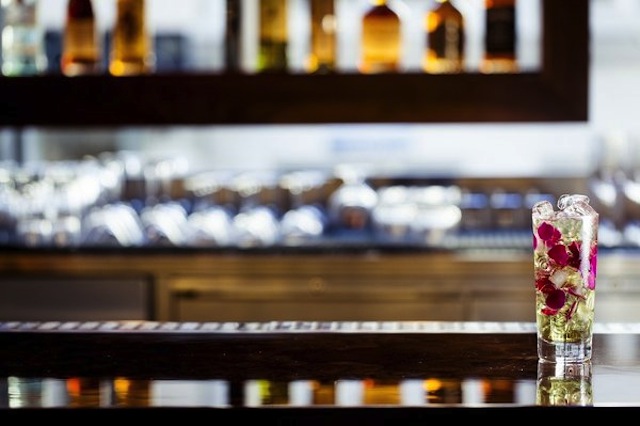 OneUp
The recently unveiled mezzanine bar and lounge at the recently overhauled Grand Hyatt (the one at Union Square) is really quite pretty. Architect Cass Calder Smith did the design, and it features a lot of wood, huge windows onto Sutter Street, and a great, concise cocktail list created by bar star Scott Beattie. It is, probably, the best bar in Union Square right now, and a great respite from the chaos once the holidays arrive.
345 Stockton (at Sutter) 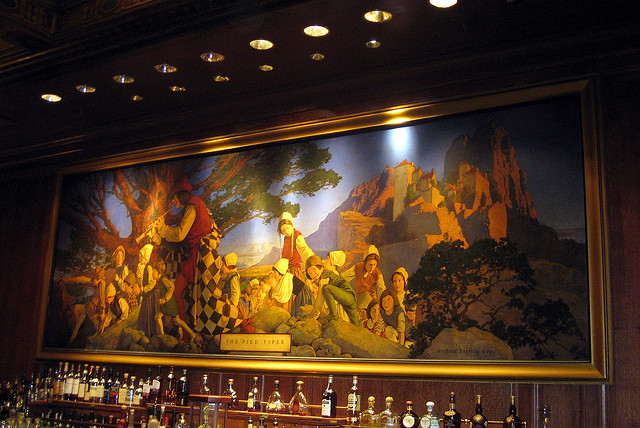 The Pied Piper Bar at the Palace Hotel
The Pied Piper is looking better than ever after nearly losing its namesake Maxfield Parrish painting, which was restored and returned to the bar after a public outcry changed the owners' minds about selling it. With brightened colors and Parrish's signature warm and luminous tones, the painting casts a cozy glow over the bar, which serves lunch [pdf] and dinner [pdf] in addition to classy cocktails like their signature martini. It's the perfect spot for an after-work (or during work) drink if you're into wood-paneled walls and old-school elegance.

The St. Regis Hotel Lobby
The St. Regis Hotel Lobby managed to do what nearby Four Seasons and W Hotel couldn't: draw in a jerk-free crowd with a street- and pedestrian-friendly design. In addition to great cocktails, they have some of (if not the) best free bar snacks in town (two little boxes containing cheese crackers and wasabi peas). But the main reason to go here is for the energetic yet relaxing and chic vibe. With massive windows facing Third Street tamed by diaphanous curtains, it's the perfect spot in the city to feel like you're really in the city. (Also, since murals are a tradition at all St. Regis hotels, Andrew Morrow's massive murals, “Love” and “War,” are worth a thoughtful glance.)
125 3rd Street (between Minna & Mission)

Fifth Floor at the Hotel Palomar: 12 4th Street (at Market)

The View at the Marriott. (Photo: Davitydave)

(By Margaret Seelie) As days get shorter, we daydream in fluorescent-lit offices of music festivals and moments at the beach. This weekend you can have a little more summer on tap from Mollusk

Larry Ellison got what he wanted, ladies and gentlemen, and Oracle Team USA retained the America's Cup with a wide lead in today's final, deciding race. We think this might mean that we

—
The 7 Best Hotel Bars In San Francisco
Share this