Before the lines and fanfare that signaled the arrival of Bi-Rite Divisadero, the good folks of San Francisco's most talked-about grocery store asked, "If Bi-Rite Divis were a sandwich, what would it look like? What would it taste like?" Today, with the store's official opening and the unveiling of an exclusive Divisadero sandwich, we have our answer: It tastes like baloney. OK, fine: Mortadella. And it's a perfectly suitable lunch.

Mortadella, pork aficionados will point out, is far superior to baloney/Bologna — the bastardized American product it inspired. Whereas Oscar Mayer saw fit to stuff their sing-songy lunchmeat with lips and assholes, real mortadella is a high quality cold cut that has all of the fatty pork mouthfeel with none of the hot dog aftertaste. In a neighborhood where Nopa sits across from Popeye's chicken, it makes sense that a high-end version of a vernacular meat should form the backbone of "The Giuseppe" — which is what they're calling this creation: 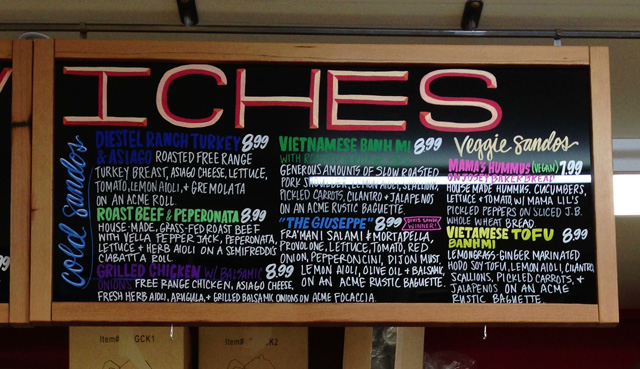 It is nice two see two meats living in harmony in one sandwich here: the salami's presence is noticeable, but politely underwhelming in the presence of the buttery mortadella. On the other hand, provolone is sort of a boring and milky white cheese that would probably back down if there were something sharper around.

Likewise, people tend to have strong opinions about raw onions, which will not hesitate to shock you in the face. We recommend skipping the red onions if you are at all hoping to make out with your lunchmate.

The rest of the accoutrements start to crowd the sandwich a little bit, but they work together nicely: there's Dijon mustard, lemon aioli, balsamic vinegar and a touch of olive oil all threatening to squeeze out the tomato with every mouth-serrating bite of the Acme baguette. That's just the sort of risk one takes when ordering baguette-based sandwiches and living in neighborhoods that are a little tough around the edges: Danger is part of the appeal.

As for the lines: a chipper ice cream scooper greeted us as we strolled through the sliding automatic doors around 10 a.m., where we found the store to be surprisingly populated for a Wednesday morning. But there was no wait at the deli line or the checkout counter and sandwich construction took about a five minute turnaround. Just enough time to pick out which variety of unfiltered, organic ginger ale would pair best with our lunch.

If we had to give The Giuseppe a grade, we'd rate it about a B+. A quality sandwich that won't exactly blow your mind. At $8.99 ($8.94 if you don't need a bag) it's not the cheapest, but you'd be hard-pressed to find a better, lower rent sandwich anywhere else in the city. Every neighborhood gets the sandwich it deserves, basically.

One-half of the sandwich menu at the Divisadero Bi-Rite. Photo: Andrew Dalton/SFist

Here's another incident in a wave of iPhone snatchings across the city, but this one was in the otherwise less often crime-ridden Castro. Personal trainer Dalton Huckaby was both mugged and assaulted on

There are countless stories to tell in San Francisco, but sometimes a picture says so much more than mere words can. Each week we present to you 7 Reasons. (Our sister site LAist