The previously mentioned anti-domestic violence message, inspired in part by Sheriff Ross Mirkarimi's remarks that his ongoing domestic abuse case was a "a private matter" went up on Tenth Street at Harrison yesterday. The advertising space situated a few long SOMA blocks away from the Hall of Justice was paid for by crowdsourced donations organized by La Casa de las Madres, who are now hoping to raise another $2,500 to put up a Spanish-language version of the billboard.

While the billboard itself actually makes no mention of the embattled Sheriff, Mirkarimi's inappropriate remarks have been widely publicized during the case. Still, organizers from La Casa De Las Madres would like to make it clear that, "the campaign is not about determining Sheriff Mirkarimi’s guilt or innocence, which remains a matter for the judicial system, but rather an effort to reassure victims of domestic violence seeking help in San Francisco."

Below, one more shot of the billboard on Tenth Street, conveniently located near CostCo: 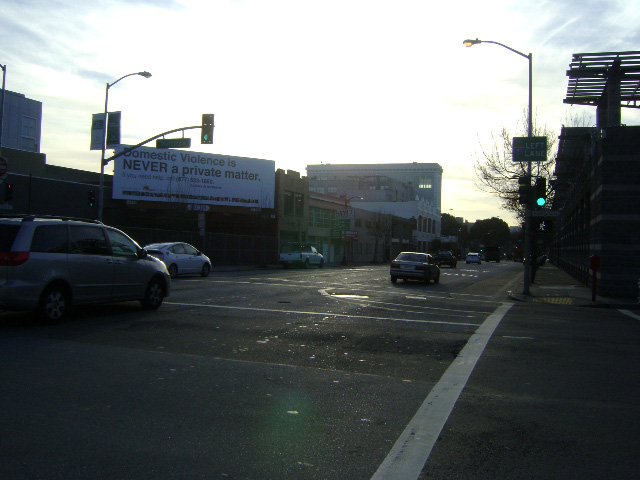 DESIGN: Attention Design Geeks: At global digital design competition, Cut&Paste, sixteen 2D, 3D, and motion/animation designers will be putting their skills to the test for a chance to compete in

Down by the Marina Green and the tony Marina Yacht Harbor, an inattentive Porsche driver has driven his penis extension fine German automobile in to some roadwork along Marina Boulevard. According to eyewitness