After Oakland's Occupy protests turned violent Tuesday night, the mood at the Occupy SF counterpart on Justin Herman Plaza was agreeable, but noticeably tense on Wednesday. Attendance may not have been as staggering as the thousands that showed up across the bay, but rumors of an impending SFPD crackdown on the plaza brought out a steady flow of Occupy movement sympathizers throughout the night.

When we arrived on the plaza around 8:30 p.m, however, the mood was calm. The connected folk in the camp were glued to Twitter, keeping up with Occupy Oakland's efforts to reclaim Frank Ogawa Plaza. Occasionally someone would walk by with purpose, smartphone glowing in hand, exclaiming something along the lines of, "Oakland took back the plaza!" As if the amphitheater in downtown Oakland were a strategic high ground rather than a symbolic meeting place. Twitter is every bit as indispensable to these protests as the media has made it out to be, but that has its downsides: many of the twitterati with the highest follower counts (and thus, the loudest voices) were not actually in attendance. More than once during the night we spotted problematic tweets with glaring inaccuracies.

Still, we don't mean to imply that folks on the plaza were being sensationalist or spreading misinformation. On the contrary: volunteer greeters, medics and legal counsel were all helpful, informative and generally in a good mood. Most seemed happy to see the influx of new faces and wanted to make sure the newcomers got their complimentary tear gas preparedness kits: 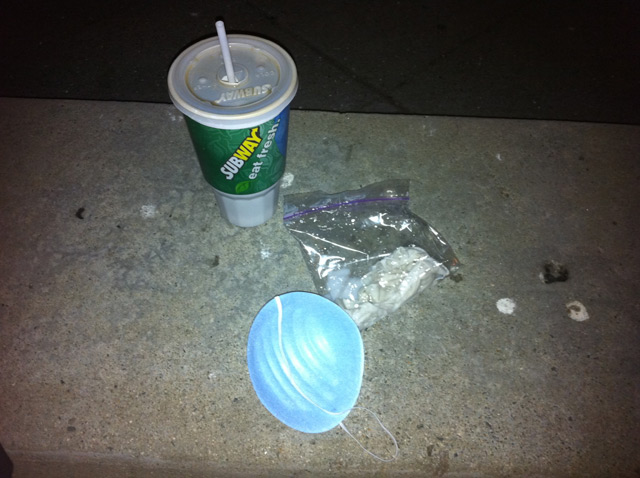 By 9 o'clock most of the group seemed sure the impending SFPD crackdown would hit around 10:30 p.m. Rumors of a large police presence mounting up at 15th and Folsom were confirmed via sepia-toned Instagram photos. Similar rumors would persist throughout the night though, placing the SFPD mass at 14th and De Haro in Potrero Hill and later on Treasure Island where officers claimed to be staging a "training exercise" at 1:30 in the morning. Despite shuttling what we heard were six or seven Muni buses full of riot-ready officers around SoMa and even over the Bay Bridge, the SFPD's show of force never materialized on the plaza. The closest thing to a police confrontation we spotted was one congenial officer, strolling through rounds of the camp, smoking a cigar under his Ed Lee-esque mustache and politely entertaining some of the more radical anti-authority comments from occupiers.

By 10 p.m, the politicians had showed up. Supervisors John Avalos, David Campos, Jane Kim, Eric Mar and later David Chiu all made an appearance on the plaza. Having all of our least tall city supervisors in attendance kind of makes it difficult to see them when they address the crowd, but we have to give them props for sticking it out well in to the night. Avalos sat on the ground with protesters while camera crews swooped in to get their shot. Jane Kim defiantly wore open-toed shoes, showing she wasn't as concerned about the sanitary conditions on plaza as the Mayor has been. And Eric Mar reminded us that he's a huge Rage Against the Machine fan, among other inspiring protest anecdotes.

State Senator and candidate for mayor Leland Yee apparently brought along 49er Vernon Davis, who was with him at a campaign fundraiser in the Fillmore. We couldn't confirm Davis' appearance, but Yee and most of the supervisors were all in attendance until past 4 a.m. 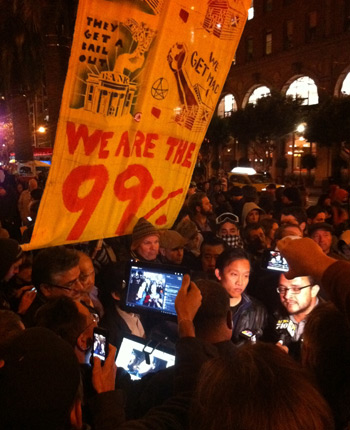 Supervisors Avalos, Chiu, Campos, Kim and Mar speak to a news crew amidst a crowd of Occupy SF demonstrators.
At 1:30 a.m, an impromptu press conference sprang up around a news crew as they attempted to interview the politicians in attendance. Turning from the cameras to the crowd, Supervisor Avalos took to the People's Mic - that eerily cult-like parroting of information the crowds use in lieu of electronic amplification - to recap what he and his colleagues had explained to the media: the five supervisors in attendance, along with Senator Yee were there to offer their support and work with the Occupy SF group to ensure that they could remain on the plaza peacefully.

None of the politicians who put in calls directly to Mayor Lee, had any idea if or when a raid would actually occur, but the general consensus on the plaza was that SFPD wouldn't move as long as the politicians were on the ground. Claiming their presence prevented the Mayor from sending in the troops might be giving the Justin Herman Six a little too much credit, but we can't deny that having them on the pavement seemed to have a calming effect on the crowd.

One occupier raised a prickly point when he called out the Supervisors for supporting tax breaks given for billion dollar companies. (Referring to the Twitter tax break, obviously.) "Tax breaks for billion dollar companies" is a jingle that rings loudly with the Occupy crowd, but to boil it down to that one issue alone is to ignore the fact that the estimated crowd of over 1,000 people would not have assembled on Justin Herman Plaza last night without Twitter. That isn't to say that a tax break for Twitter was necessarily a good move for the city, but rather it just simply is not the same issue as a bailout for a bank that foreclosed your neighbor's house or started charging for a free debit card. No one is going to suddenly withdraw their Twitter assets and place it in a local credit union.

Finally, a word about the non-existent SFPD raid: It's clear here that the authorities and the Mayor's office are monitoring the movement's activity online. SFPD knows they are being watched as they assemble the troops, whether it's from a KTVU chopper or a single twitter user on the ground. In a way, SFPD's Overtime-collecting Muni bus joyride through San Francisco was as much a show of power as lining up the riot squad on Beale Street. But the physical separation has a positive effect for both sides: It allows the city to flex their muscles while implying they were serious about the eviction notices. And for the Occupy Movement, it provides a rallying point that draws support from more moderate 99-percenters — a group the movement still needs more of in order to shake its marginalized, radical image.

The surgical mask offers a modicum of protection in case tear gas is deployed. The ziploc'ed rag is soaked in watered-down Maalox, a remedy for rinsing out your eyes should you find yourself in a plume of tear gas. The soda is because sometimes protesters get thirsty.

Unfortunately for fans of snow, steep streets and bone-shattering aerial maneuvers, the city's original urban snowsports competition never did get to return to Fillmore street after the Pac Heights crowd booted all the

We receive tons--tons!--of reader fan mail. We also receive the occasional piece of hate mail. It comes with the territory of having your name out there and writing for a wildly successful