Remember that Willie Brown walking tour we got so excited about? We couldn't let it slide by without a follow-up report, so we sent our senior walking tour correspondents from the Tenderloin Geographic Society to investigate. Here's what the they came back with:

The corner of Mason and O’Farrell, 9 o’clock, Saturday morning.

One sees looks of both hope and confusion as fathers set themselves, sextant-like, upon street corners with maps revealing half a city, attempting orientation against a confusion of hills and Bay. The kids, wild-eyed, lift their chins up at what gets taken for tall for back home, stopping only to spar with bamboo backscratchers.

Honeymooners honeymoon, the rest of the world be damned. Across the street a man and a woman will give one another the silent treatment for the rest of the day. It is a sweet music to hear Zee Pinecrest Diner pronounced correctly, en français. Early sunlight flatters the concrete in an unrecalled fashion, and a San Franciscan’s sleepy fancy turns to envy: how lucky to visit this city and not become undone by politics, practicality, Muni.

But there is work to be done, and so to the meeting place, the American Youth Hostel.

The lobby was full of 20 or so of us, from no less than five continents--two San Franciscans and a whole lot of youths hosteling. We had gathered for what can scarcely be called a walking tour, as the Henry George Historical Society’s Radical San Francisco tour is much more akin to a sprint through (depending on mood and questions) several centuries of history, inequity, economics, social justice, politics, counter-culture, revolution, cataclysm, with a few chuckles along the way. And naturally, you’ll discover a thing or three about Henry George.

David Giesen, a teacher and the director of this non-rival Society, is our guide. He immediately wins points with the pace he sets, somewhere between “trying to dodge the Save the Environment clipboard jockeys” and “walking with extreme purpose.” This gives the Tenderloin Geographic Society an opportunity to instruct the foreign attendees that fast walking is a sign that you’re a local.

But the pacing is not just a stamina point, possessed as he is with extreme purpose: there’s much history to impart in such a short time. Jim Jones, the Black Panthers, splinter groups of Pranksters and Diggers: utilizing the geography of the city, Giesen chronicles idealistic movements torn apart by both the establishment and the movements themselves. As the walk progresses up and over hills, receding into the past, and to the crux of current economic misadventure. A stopover in the Financial District has us puzzling over land value and speculation, so if you didn’t like your economics class the last time you were forced to take it, this hands-on approach may change your mind (the unseasonably clement weather didn’t hurt). There are alleys, there are plaques, there are discussions about color-coded fire hydrants and cisterns. Municipal geeks, this one’s for you.

But as mentioned in a previous column, we’re not about to ruin the surprises--you’ll have to attend if you want the full story--but we can show you a few tantalizing details. 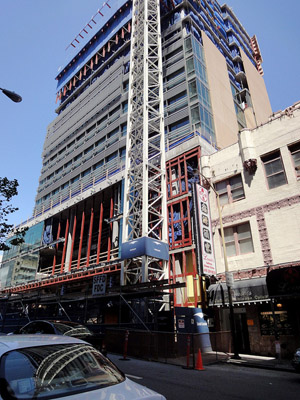 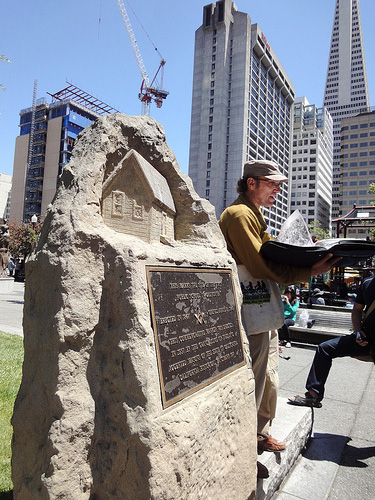 What is this monument and why is it important to women’s rights? 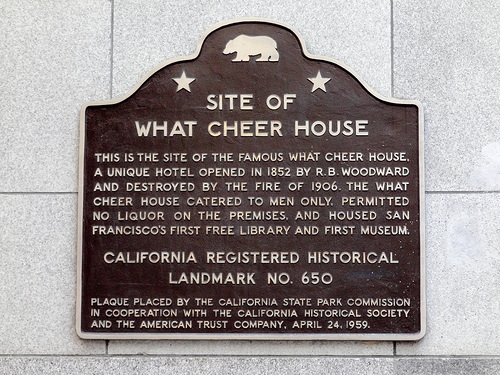 Ever wanted to learn about the hidden context of historical markers? 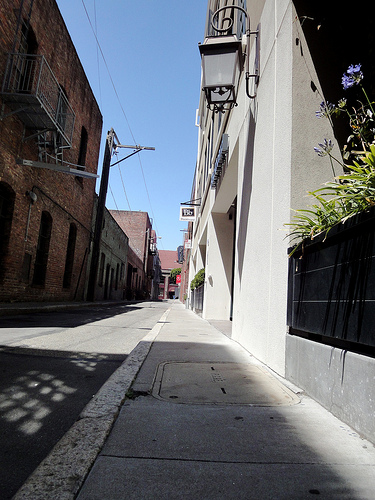 Why was this sleepy street the earliest financial center of the West Coast? 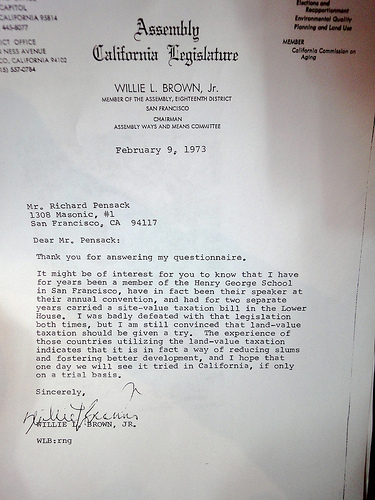 How is it that Da Mayor was once a starry-eyed idealist? 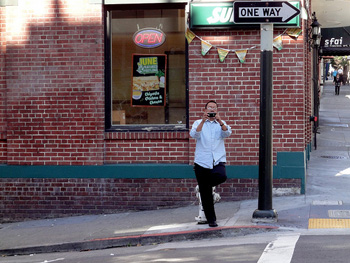 Is this man hoping for a Willie Brown sighting? Does one of us resemble him? It’s the hat, right? It’s the hat.

If you’ve been paying attention, you’ll end up back where you started, dizzy with history.
We dare you to find a walking tour that mentions José Rizal, Sun Yat-sen, and Peter Berg. If you don’t know who any of these people are, then your Saturday plans are set.

Giesen won’t tell you everything, but that’s part of the fun--he’ll give you the tools for when you don’t know where to begin. And just think about it: there are so many people from far away who now know more about the seedy dealings of your city than you do. Will you let the inequity stand?

Information about Georgist theory and the walking tour can be found at the Henry George Historical Society website.

The Tenderloin Geographic Society is San Francisco's home for colloquial cartography, citizenship services and walking tour reviews since 2006. Stay tuned for the Tenderloin Report. If you've missed any episodes, you can always catch up here.

Beloved local legend Vicki Marlane died this morning at 7 a.m. of an undisclosed illness. She was 76. Nicknamed "The Lady With the Liquid Spine" for her trademark, sultry flexibility while lip

ART: Brian Gross Fine Art presents Appellation Series, an ongoing series of landscape photographs by California artist, Lewis deSoto, in which he seamlessly merges together 50 to 200 photographs per image into panoramic