Beloved local legend Vicki Marlane died this morning at 7 a.m. of an undisclosed illness. She was 76. Nicknamed "The Lady With the Liquid Spine" for her trademark, sultry flexibility while lip syncing, Marlane was profiled in the New York Times two years ago, and was thought to be the oldest, continuously performing, transgender performer in the country. Until recently, she performed twice weekly at Aunt Charlie's Lounge often doing three or four numbers (and costume changes) each night.

The show, the Hot Boxxx Girls, was Marlane's baby, and she produced it over the last decade, hiring and firing drag queens both young and old, polished and unpolished, to do some of the most unironic, old-school female impersonation in the land. Marlane was a fan of Celine Dion numbers, occasionally stripping down to a shiny two-piece get-up in the middle of a song, age be damned. She brought a great deal of pathos and passion to the show, earning her thousands of fans over the years. SF Weekly also awarded her Best Drag Queen in 2009, some six decades into her drag career.

Memorial services, and tribute nights, are in the works but as yet unannounced. 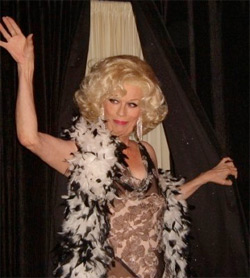 Marlane first got her start as a dancer in a Minnesota gay bar in 1950. She later toured on the carnival circuit, in the sideshow as a female impersonator, before working as a call girl in Florida and ultimately moving to the Bay Area and having sexual reassignment surgery in the early 1980s. A documentary on Marlane's life, titled Forever's Gonna Start Tonight: The Vicki Marlane Story, premiered at Frameline in 2009 (see the trailer below). In her later years, she occupied a rarefied space, not necessarily well understood outside the LGBT community, as a "transgendered drag performer." She was no longer a man in a dress, but a woman who donned makeup, sequins, and wigs to become a new and more glamorous persona, separate from her own. She also lived through three quarters of a century on the frontlines of new rules, and possibilities, for gender identity, faced considerable discrimination along the way, but succeeded in living out her last three decades as a fully realized woman who loved the stage.

Unfortunately, it sounds as though Vicki's end came at a hospital, and she did not get her wish to die on stage, in sequins, as she told the NYT. "I wear glasses," she said. "When I’m performing, I don’t wear them. I like to be blind. I make believe that the audience is staring at me in adoration, going, 'Oh, Vicki.' That’s how I’d like to die, on stage. At the end of one of my big numbers I’d just fall to the ground. They’d be applauding, saying, 'This is so great,' and then they’d start wondering, 'Why is the poor thing not getting up?'"

Also, here's a clip of her performing "The Power of Love" several years back, at Aunt Charlie's.

Remember that Willie Brown walking tour we got so excited about? We couldn't let it slide by without a follow-up report, so we sent our senior walking tour correspondents from the Tenderloin Geographic