Here's a little taste of the Proposition 8 hearing coming up on Monday in San Francisco -- high-power attorneys Ted Olson and David Boies (conservative and liberal, respectively) just released a video about how the Prop 8 case mirrors the landmark case that legalized interracial marriage, 1967's Loving v. Virginia. The two attorneys (and unlikely allies) talk about how the Loving case set a major precedent for the current fight for same-sex marriage and civil rights.

Update I: Huh. We received several reports that, while trying to post the 'Loving' and the Fight for Marriage Equality video, Facebook blocks it. And, yes, it seems that Facebook is blocking the pro-gay marriage video. Behold: 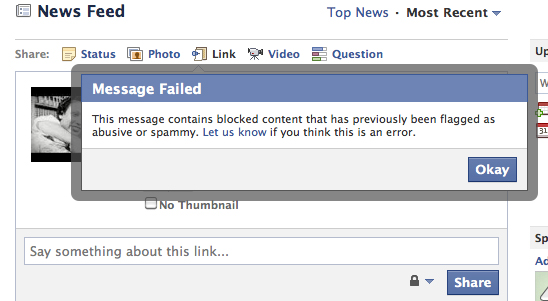 Hopefully, it's a minor glitch that the fine folks at Facebook will solve posthaste.

Update II: Problem solved. The video is no longer blocked on Facebook. Post away if the mood should strike, folks.

MUSIC/POETRY: Head over to the beautiful Fort Mason for an intimate poetry reading and music performance as part of the weekly Thursdays at Readers 2011 Poetry Series, featuring the legendary Jonathan Richman

So, Missionites and fans of Dolores Park may have already noticed the ugly fencing that went up around the playground and central meadow of Dolores Park earlier this week, marking the first stage

—
"Loving" and the Fight for Marriage Equality [Updated]
Share this