The spring of 1849 -- dawn of a year forever branded into the national consciousness as the era of the California Gold Rush. And so it was -- but that was back East, in the "States". In San Francisco, the Gold Rush had actually begun an entire year earlier.

The United States were at war with Mexico -- it's President Polk and "Manifest Destiny" time. San Francisco (then Yerba Buena) was conquered without a shot in July of 1847.

In the first month of 1848, gold was quietly discovered in the foothills east of Sutter's Fort. Days later, the Mexican war came to an end, and Alta California became sole property of the United States.

San Francisco was skeptical about the gold strike, but in May of '48, Sam Brannan made his famous appearance on Market Street brandishing a bottle of gold dust. His shouts of "Gold! Gold! Gold from the American River" triggered the first wave of the Gold Rush.

The village of about 500 souls was emptied almost overnight as its inhabitants hotfooted it for the hills. Among the many businesses left completely in the lurch was Sam Brannan's own newspaper, the California Star.

While the entrepreneurial Brannan was busy becoming a millionaire selling shovels to gold miners, by June his entire staff had abandoned the paper and set off to make their own fortunes. 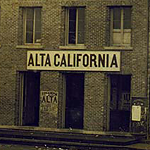 Brannan sold what was left of his newspaper to a more civic-minded businessman, Mr. Edward Cleveland Kemble. Kemble resuscitated the Star (along with San Francisco's other gold rush-crippled paper, the Californian) as a brand spanking new paper he called the Alta California. The first issue appeared at the tail end of 1848.

That brings us right up to today's subject.

The editorial on the front page of issue #5 of the new paper is a treasure trove of contemporary San Francisco perspectives.

Occupying the former space of Cassidy's (which was The Watering Hole many moons ago), Bloodhound debuted into the SOMA scene last week with its welcoming atmosphere and reasonable prices. During the past month,