From the tallest skyscraper in the City of Brotherly Love to Canadian tourism copywriting brilliance, here's what you should know from our -ist cities:

This week, Phillyist took a gleeful listen to the White Stripes' exciting new release, watched in awe as their new tallest skyscraper was finally completed, found a cheaper way to get to Gothamist, invented a tasty new dessert, and brought back their Craigslist Round-Up feature with a bang.

What a weird week for San Francisco! SFist called attention to the fact that KRON 4 will not broadcast the pride parade--wha huh? Island for sale! What a bargain! SFist yelped a bit about yelping with Yelp's founders. Super-dirty review of a super dirty movie, anyone? For your safety, a color-coded guide map to gang zones. And, finally, some urban repurposing: former car bonnets are now a nice band shell in Golden Gate Park. 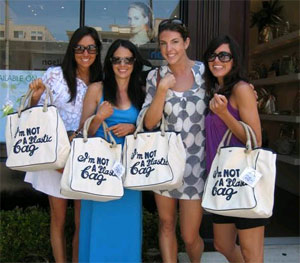 LAist is asking the tough questions: Would you pay $3,121 for a pair of exclusive Prince tickets? How about $15 and a 2-hour wait in a line for a designer "I'm not a plastic bag" canvas bag? This all feels like an episode of HBO's Entourage, eh?. On the down and dirty side of things, the Valley's largest pet spa is accused of major animal abuse, Hermosa Beach has not one, not two, but three Cajun food restaurants and well, the Police are back in concert form (and a video of them singing Roxanne)!

Gothamist marveled at Mayor Bloomberg's second political party change in seven years. It set the pace for a week that included mice loving Pinkberry, freegans explaining the benefits of dumpster diving, and a weird incident involving a huge, faceless stuffed monkey. And that doesn't even include the crazy unfolding story about the people disrupting a Shepard Fairey street art gallery show - shades of the Splasher, you know! Torontoist kicked off the week by liveblogging the Much Music Video Awards. But oh, that was just the beginning. They got excited over their police force's new fleet of smart cars, celebrated the joys of sheer pants, and enjoyed their city's new gay-visitor-targeting slogan, "As Gay As It Gets." Jealous?

And check out the favorite posts on Austinist, Chicagoist, DCist, Houstonist, Londonist, Sampaist, Seattlest, and Shanghaiist.

Photographs: Top, inside of a New Jersey Transit Train by Triborough on Flickr; shoppers buying Anya Hindmarch's "I'm not a plastic bag!" bag by Julie Wolfson for LAist; and Avril Lavigne at the Much Music Awards, courtesy Much Music

It's the Gay Pride Parade! Since you can't watch it on TV anymore anyways, just drag your sorry self out of bed and head anywhere on Market Street between the Embarcadero and Civic

--The Dyke March was fun. [Chron.] --The Recall McGoldrick people didn't get enough signatures to get on the ballot. [From the SFist Tips line!] --It's the winner of the World's Ugliest Dog contest!