There are still 17 fires burning across Northern California, but containment is now looking closer to becoming a reality for the largest of the fires in Napa and Sonoma County.

Meanwhile the death toll from the fires, a gruesome ticker that has ticked up at least twice a day all week long, hit 40 Saturday, and there's no end yet in sight for this uptick. The number of missing people, however, has shrunk from upwards of 1,700 at its height to 172, and as the Associated Press says, "officials think they'll locate most of them alive."

22 of the 40 deaths have been reported in Sonoma County, most or all of them as a result of the swiftly moving Tubbs Fire, and likely all occurred between late Sunday, October 8, and early Monday, October 9 as residents in Santa Rosa were caught by surprise by the flames.

Fears of high winds whipping up the fires and existing hot spots Saturday night appear to have been overblown, and light winds early Sunday have made for rising containment levels on the three largest fires in the North Bay. Via Cal Fire, they stand as follows: 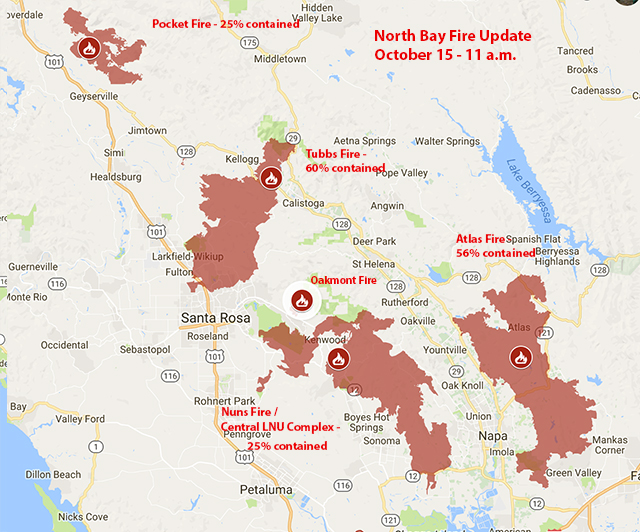 A new smaller fire that was sparked just after 8 p.m. Saturday near the Oakmont neighborhood in Santa Rosa, called the Oakmont Fire, reached 550 acres and is 15% contained.

Mandatory evacuation orders in Solano County, as a result of the Atlas Fire, have now been lifted, per the Chronicle.

Two more community meetings, one in English and one in Spanish, are being held in Napa Sunday and will be live-streamed here.

All previous coverage of the North bay wildfires on SFist.

This year, says Twitter CEO Jack Dorsey, harassment and abuse was the company's "top priority" and they've "made a lot of progress." This was part of a mini tweet storm Friday that Dorsey

All iPhones could have Face ID next year. [CNet] [Wired] argues that "Uber and Lyft Haven't Revolutionized the American City—Yet." Development at 9th Street parcel could rise as high as 55 feet.